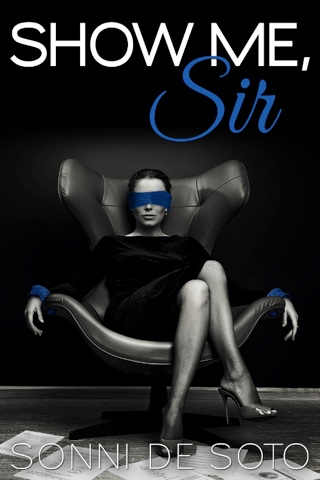 This novel contains explicit sexual scenes including bondage and voyeurism.

Max Wells is a ball-busting, ass-kicking testament to female empowerment, who’s yet to meet the person who can push her down.

Until she meets a man she only knows as Sir.

Shamelessly deviant, Hayato knows exactly what Max thinks of Dominants like him. So ready to dismiss his lifestyle, she’s the type to assume she knows everything about it and him after one cursory glance from the outside in. But, looking at Max—at her intelligence and passion—he can see more in her than the misconceptions she’s deliberately blinding herself with.

And, determined, he plans to show her more.

Max and Hayato engage in a dance of wit, will, and seduction as they negotiate roles, rewrite rules, and learn the true meaning of empowerment.

But, just as their game heats up, it gets used against them. Seeking to punish them with their play, someone threatens to drag their private lives out into the public spotlight.

With high stakes and bitter scandal looming over their heads, Max and her Sir will have to work together to show that what the world thinks they are does not define who they are. 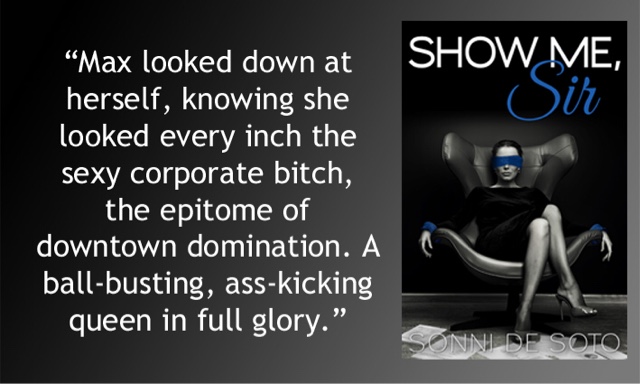 Buy links for Show Me, Sir: 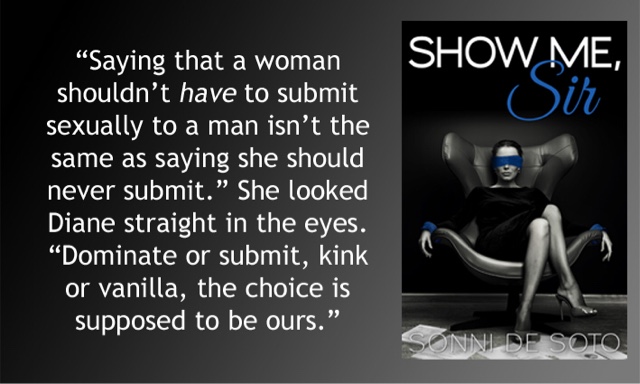 “I’m looking at you, Max.” She watched his firm mouth – his tongue and teeth – form the words. “I like looking at you.” His smooth voice flowed over her senses. “I want to touch you.”
Her breath caught and her eyes opened wide.
Okay, too much. That was way too much.
Having him there, having him watch her, felt wicked and dangerous and was toeing an erotic line that Max had never known.
She couldn’t imagine what having him touch her would be like.
She wasn’t sure she wanted to know.
“You said you wouldn’t,” she reminded him, wavering between want and worry.
“I said I wouldn’t pay to do so,” he clarified, his hand reaching out to stroke a fallen strand of her vibrant hair. “When I touch you, it won’t be for any other reason than I want to and you want me to as well.” Curling the strand around his fingers, he tested its texture and feel. “Tell me you want me to.”
She shivered. It didn’t feel safe – him behind her, fully dressed while she was half-naked. It didn’t feel safe to be in a room full of mirrors with Hallie somewhere in the store. It was frightening and intense. Frightening because it was so intense.
“Imagine it.” He let his hand slide through the thick mass of her hair. “Think about how good it’ll be when I place my hands all over your soft body. Think about how wet I can make you, not just slick but soaked.” He paused, his gaze stroking south. “You’re already more than halfway there, aren’t you?” He leaned in close, his hot breath caressing the delicate, sensitive curve of her ear. “Just say the words. Tell me what we both know you want.”
God, she did. God help her, she wanted this man to touch her, to stroke her, to fuck her. He made her body feel weak with need and consumed by mindless desire. She wanted him to touch. She wanted to touch. She wanted to strip and be stripped and to drown in the promise his hot gaze held.
“Say it.”
She wanted to. So badly.
She opened her mouth. “No.”
She wanted him, everything he was offering her, so much her body hummed with it.
And it scared her.
What kind of woman – what kind of modern, independent, strong, and smart woman – was she that she would let him have this much power over her? Was a word away from becoming a puddle of sexual putty in his hands? He was turning her into something she’d spent her entire life rejecting.
What was wrong with her?
Her attention snapped back, her worry turning into panic, then an unexpectedly feral snarl, low and perilous, rumbled deep in his throat. She flinched, afraid to look at him. Afraid to move or speak or breathe while the beast inside the man clenched.
She’d never felt so naked, so vulnerable and helpless, in her life.
Finally, she braved a look up, readying herself for his ire, sure he would storm ahead or storm away.
But he just nodded stiffly, his face and body held rigidly in control. She watched his nostrils flare and a muscle in his jaw tick. The fire in his eyes burned even as cold ice hardened them. They narrowed on her predatorily.
Slowly, each movement precise and exact, he reached inside his jacket, pulling another sheet from his pocket. Holding it up like a dare, he said in a low, calm, articulated voice, “Touch yourself.” 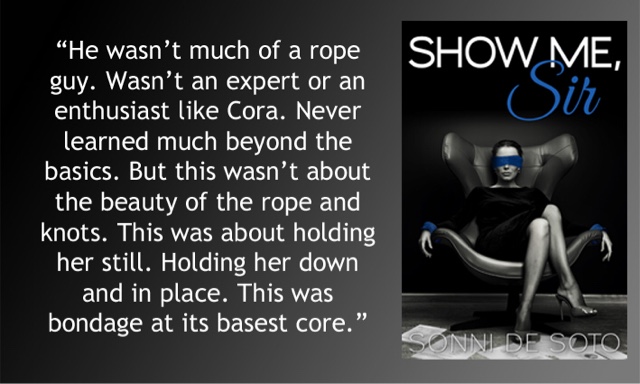 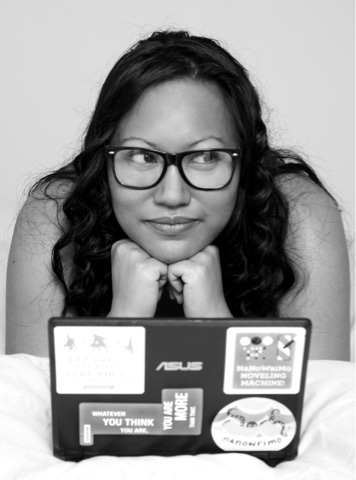 Sonni de Soto is an Asian kinkster of color, who loves and lives the lifestyle when she can. Her work involves The Taming School and Show Me, Sir, as well as stories in Between the Shores: Erotica With Consent and The First Annual Geeky Kink Anthology. Like any good nerd, she loves learning new and interesting things about science, art, culture, and, of course, sex and love. She’s always thrilled to hear from readers. 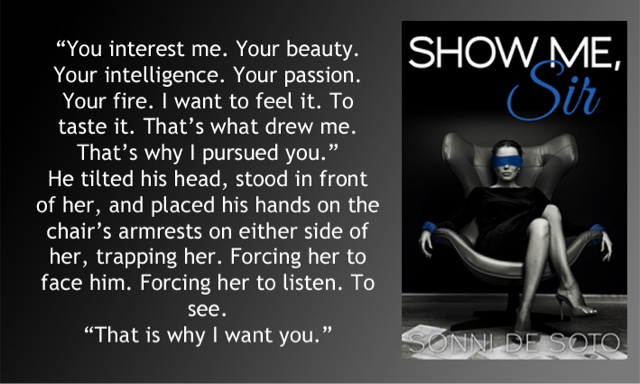 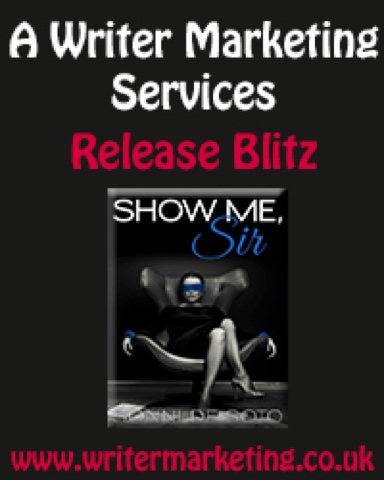