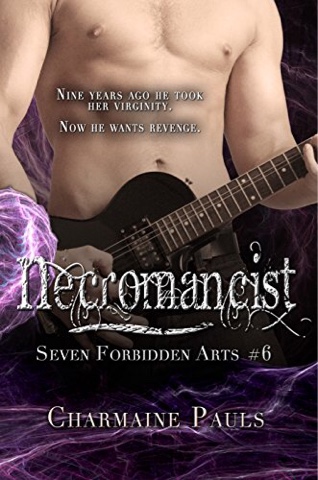 Nine years ago he took her virginity. Now he’s back for revenge.

Alice Jones has loved one man only–the man who stripped her from her clothes and defenses to leave her vulnerable and cold, the man who took her virginity and went downstairs for ‘a glass of water’ never to return. After nine years the once poor and shamed Ivan Kray is back in London, now a world-famous rock star. He is wealthy, successful, surrounded by millions of fans, and built like a machine while she is struggling, single, overweight, and has to borrow affection from her neighbor’s cat. To make matters worse, he blames her and her family for driving him away. This time round, Ivan doesn’t come to her with gentle caresses and roses. He comes with vengeance and thorns that will either purge or destroy her.

A malnourished toddler barely kept from starving by a nursing dog, Ivan Kray grows up into a hard and emotionally scarred man with a golden voice and a cursed art. Suffering from visions and voices in his head, he finds peace in Alice Jones’ heart and naked arms, only to be knocked down once again. When she chooses her upper-class family over him, he slaves for nine long years to climb to the top of the ladder with one purpose only–to take revenge. He swore he’d be her first and last, and he isn’t a man to break his promises. His plans of submitting Alice to his will are hampered when someone tries to kill him. The sinister attempts on his life are more than the actions of a fan gone fanatic. When his hunter uses Alice to achieve his ominous goal, Ivan must acknowledge his true feelings and put his skills as necromancist to the ultimate test. Will his unusual ability be enough to save Alice before it’s too late to tell her the truth? 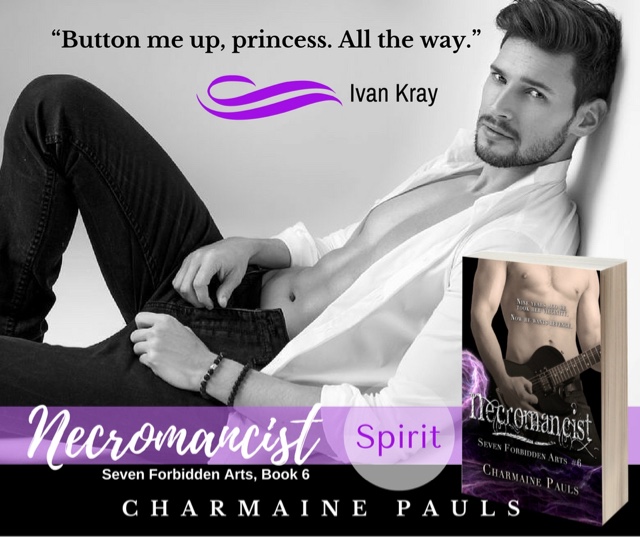 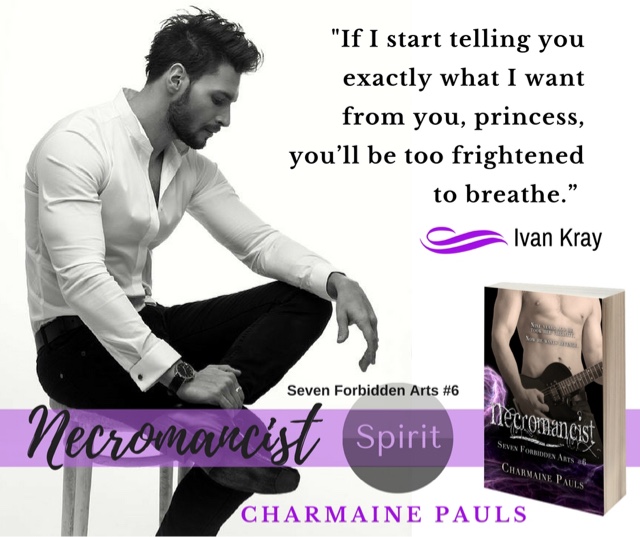 Walking into her office the following morning, a bouquet of twelve red roses stood on Alice’s desk.
Tilly put her head around the adjoining door. “They were here when I got in. There’s no card. Any idea who they’re from?”
Alice shook her head, admiring the velvet leaves and inhaling the sweet scent.
“Come on, you can tell me.”
“I honestly don’t know.” She pulled out her chair but froze when Ivan walked through the door.
“Morning, handsome,” Tilly said. “Early rehearsal?”
“Something like that.” He stopped in front of Alice’s desk. “Nice flowers.”
She searched his face but his expression was blank. For a crazy second she’d hope they were from him. He used to give her roses.
“I’m going for a coffee in the canteen.” He held his hand to Alice. “Come with me.”
“I have to finish a press kit for the radio station.”
“It can wait.”
Aware of Tilly’s curious stare, Alice sighed and took her bag. “Tell Johnny I’m upstairs, please.”
Tilly’s gaze followed them down the corridor. When they turned the corner, Alice said, “You’ll give people the wrong impression.”
He lifted an eyebrow. “What impression?”
“Don’t play dumb. She’ll think something’s going on between us.”
He pressed the elevator button to call it down and leaned on the wall, his expression dark. “That will bother you?”
“I don’t need a scandal in my life.”
His eyes turned hard. “I’d be a scandal? Still not good enough for you?”
“It’s not that.”
The elevator pinged, and the doors opened. Alice stepped inside, Ivan close behind.
He gripped her wrist and turned her to face him. “Explain it to me.”
“I don’t want to end up in the gossip columns as your latest conquest.”
His eyes trailed over her. “Are you?”
Heat worked its way up her neck. “I don’t know, Ivan. What am I?”
“What do you think?”
“I think I’m revenge.”
“Is this because of how I fucked you yesterday?”
It was hard to hold his intense gaze, but she refused to lower her eyes. “It’s that and everything you said.”
“Yet, you let me.” His hand cupped her breast, his thumb stroking over her nipple. “You wanted it exactly how I gave it.”
Just like that, her body jumped to life. The hard tip of her breast started pulsing while heat accumulated between her thighs.
“Look me in the eyes and tell me you didn’t like it, and I’ll never touch you like that again.”
Staring up at him, she worked her lip between her teeth. She’d liked it, all right, but she wanted to be loved afterward, not consoled. That, she couldn’t tell him. It would make her more vulnerable than ever.
His hand moved to her hip, pulling her against his hard groin. “Thought so.” He ground his erection against her sex. “I’m back, Alice, and you’re mine. Doesn’t really matter if Tilly suspects that my dick was buried in your ass last night or not. Soon, everyone will know.”
Her heart contracted at his words. “Making a trophy of me again, just like in school?”
He stepped away from her. “Ashamed of everyone knowing, just like in school?”
“No.” She turned her head to the side.
“What then?”
“In two months you’ll be gone, and I’ll still be here, having to deal with the gossip.”
He pressed a button to reverse the direction of the elevator. “You think
I’m going to leave you?”
Everyone eventually did. “You did before.”
He lowered his head to put their eyes on level, his gaze narrowing with a seriousness that made her wary. “I never left you, Alice.”
She didn’t want to ponder his statement. The implied meaning was too disturbing. She looked at the floor number lighting up. “Why are we going down?”
He didn’t answer. The elevator stopped on the stage level. He took her hand and drew her down the corridor through the security door to the side stage. The auditorium was eerily quiet. Except for the dim path lights, the hall was dark.
“What are we doing here?” she asked.
He flicked a switch on the control panel and a spotlight came on, shining on the center of the stage. Her footsteps echoed loudly on the wood as he pushed her into the circle of light.
“Ivan, what are you doing?”
“You’ve always been too concerned about what other people think. You’re too frightened to let go, too worried it may actually be fun.”
“What are you saying?”
He removed his jacket and flicked it aside. “You’ve always been a good girl, haven’t you, Alice?”
She took an involuntary step back. “What’s that supposed to mean?”
“It means you always live by the rules, do the right thing, and keep up the right appearances.”
“What’s wrong with that?”
“Nothing. I’ve always wanted a good girl. It turns me on like hell. It just means you’ve got to stop worrying about Tilly and the rest of the world and think about yourself for a change. Sometimes, you’ve got to let go enough to break a rule or two, or you’ll always give in to your fear. Sometimes, you’ve simply got to take what you need, and I know exactly what you need.”
“Since you think you have all the answers, what do I supposedly need?”
“Someone who knows how to let you live a little.”
“You’re going to make me live a little?” She glanced around the auditorium. “How? By making me sing?”
He held her eyes as he slowly advanced, stopping so close her nipples brushed his chest. “I’m going to strip you naked, right here on stage, and fuck you like a very, very bad boy.” 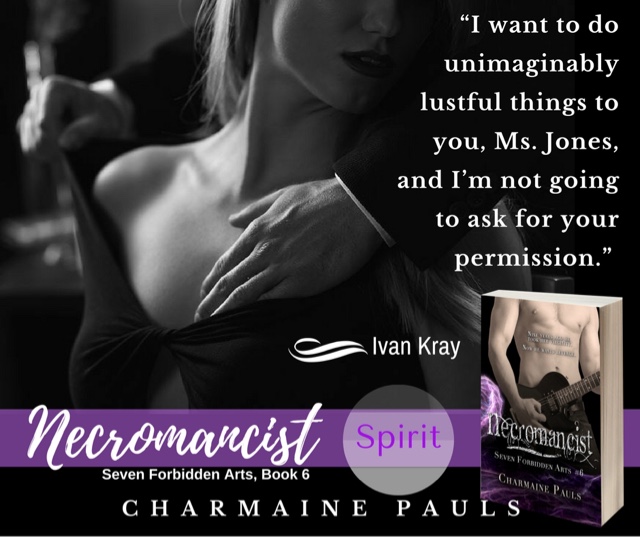 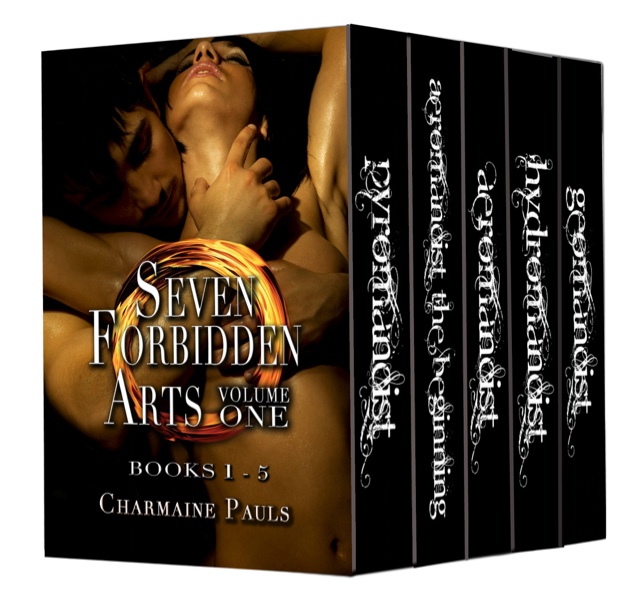 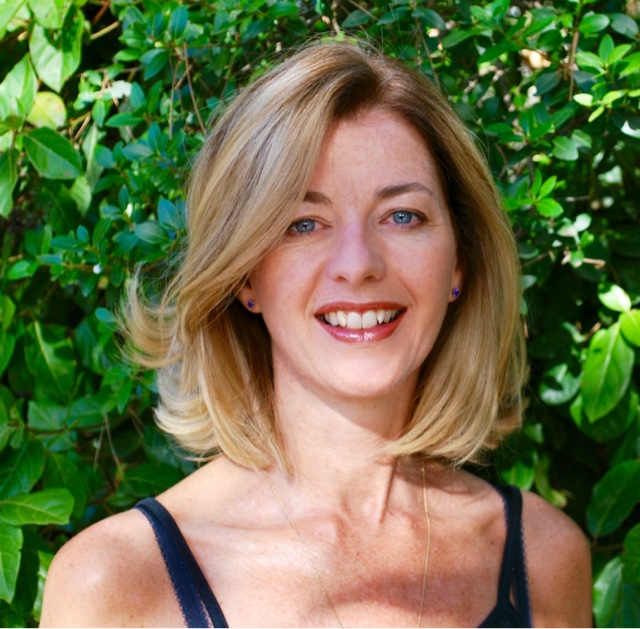 Charmaine Pauls was born in Bloemfontein, South Africa. She obtained a degree in Communication at the University of Potchefstroom and followed a diverse career path in journalism, public relations, advertising, communications, photography, graphic design, and brand marketing. Her writing has always been an integral part of her professions.

After relocating to Chile with her French husband, she fulfilled her passion to write creatively full-time. Charmaine has published eleven novels since 2011, as well as several short stories and articles. Two of her short stories were selected for publication in an African anthology from across the continent by the International Society of Literary Fellows in conjunction with the International Research Council on African Literature and Culture.

When she is not writing, she likes to travel, read, and rescue cats. Charmaine currently lives in Montpellier with her husband and children. Their household is a linguistic mélange of Afrikaans, English, French and Spanish. 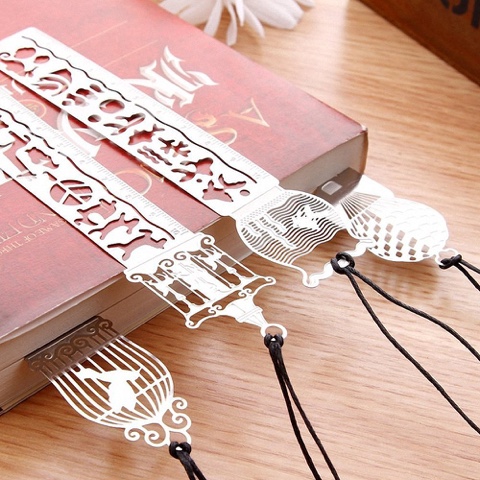