Pre-order blitz - Before the Rain By JoAnne Kenrick

Before the Rain By JoAnne Kenrick

Before the Rain is book five in Fated Desires’ multiple author series of stand-alone stories. In JoAnne’s addition to this series, a sworn-off-love Southerner escapes her failing life in Georgia and flees to the UK for a three month ‘no men allowed’ sabbatical where she unwittingly falls for the rustic charm of Rose Farm and its Welsh owner. 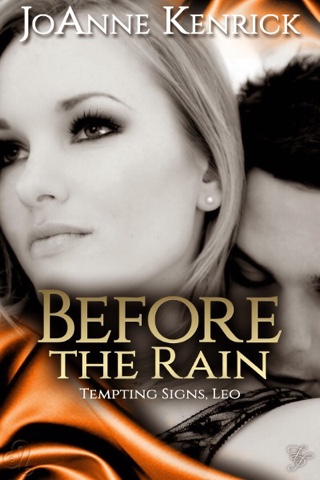 Blurb
Three fiancés in three years makes Zoe Chantilly’s relationship column for the Georgia Times her only semblance of commitment…that is until her dating advice takes a dive down the Suwannee and she’s fired.
Unemployed and single, she leaves the sweltering heat of the south and heads to the UKfor a man-free break from life. The plan? Get with nature, write a novel, and be alone. Be very much alone. But nature has other plans for Zoe.
Navigating the backcountry roads of Wales seems just as complicated as her love life. A near-collision hones her desires in on Dylan Mostyn, a Leo seething with a raw prowess and macho magnetism the Aquarius in her can’t resist.

This Welshman is as arrogant as he is gorgeous. He’s also her landlord. The undeniable and thunderous attraction between them pinnacles during a karaoke duet at the village fete, but what starts as a no-strings fling quickly spirals toward dangerous ground.

Available to add to your Goodreads TBR list
http://www.goodreads.com/book/show/24013474-before-the-rain
More on the multi-author Tempting Signs Series with Fated Desires: http://fateddesires.com/2015/01/01/coming-soon-tempting-signs-series/ 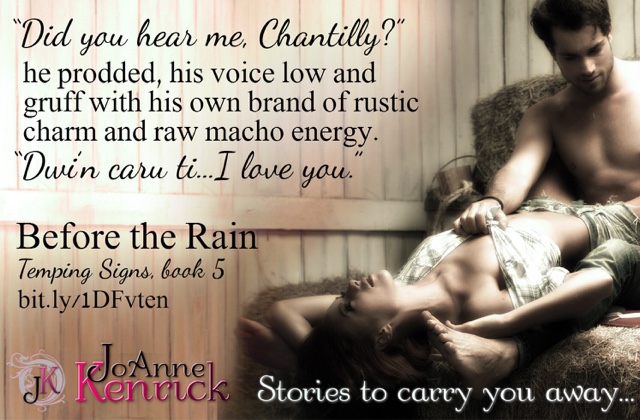 Present Day, August 1, 2015
“Dwi’n caru ti,” he rasped in Welsh, rounding out his vowels and sharpening his Rs.
Uh-oh. Dylan Mostyn only slipped into his native language around Zoe when he was horny.
He entwined his fingers with hers, his gray stare fierce yet his touch gentle.
“Did you hear me, Chantilly?” he prodded, his voice low and gruff with his own brand of rustic charm and raw macho energy. “Dwi’n caru ti…I love you.”
Ah, heck, how was she supposed to resist him now?
Like a teenager about to get her first-ever kiss, she quivered, her knees knocking together.
Damn him for being so…so…so British. With his sexy accent and his Hugh Grant hair flop and Gerald Butler’s down and dirty swoon factor. And his dimples. Gah. If she wasn’t so weak-willed, she’d squeeze in one last wham-bam before heading back to the States.
Who was she kidding? A quickie wouldn’t sate her needs. Not anymore. What had Wales—what had Dylan—done to her? Love, a four-letter word she dreaded. In all her thirty-one years, she hadn’t truly loved anyone. Had she inadvertently fallen for him? Truly fallen for him? Like head-over-ass and giddy-in-love fallen for him?
Impossible.
“You can’t leave.” He edged her against the wall of the farm-style kitchen in the stone cottage, his chest pressing against hers. “Not yet.”
“Umm.” Between his hard body and a stone wall, Zoe dodged his lips by leaning to the left and pointing to the whistling kettle atop the gas stovetop. His masculine scent with subtle hints of amber and musk enveloped her and melted her a little more.
“Do you love me?” 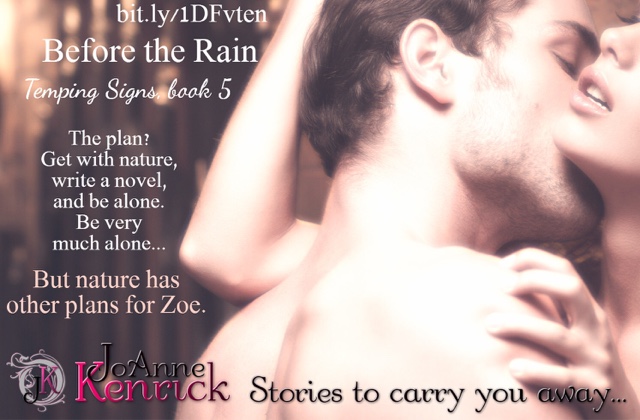 JoAnne Kenrick is a multi-published author who writes both contemporaries and paranormals. She was born and raised in a wee seaside town in North Wales, and has traveled far and wide. In true Brit form, she is a teaholic.
She now lives in North Carolina with her very own British hero, where she creates ever afters with a backdrop of those wonderful places she's visited. Come across the pond and faraway...with JoAnne Kenrick.
For more about JoAnne and her books, please visit her website: http://www.joannekenrick.com

Stay update with JoAnne’s new and upcoming releases with her quarterly newsletter. Easy sign up here: http://bit.ly/1Ox0Mga
Updates about Coming Soon and New Releases
News about contests and exclusive subscriber giveaways
Behind the scenes information about her books and author life 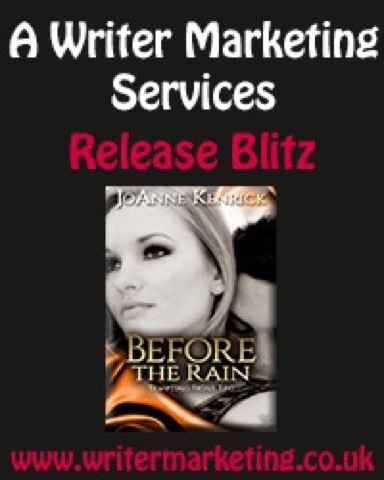