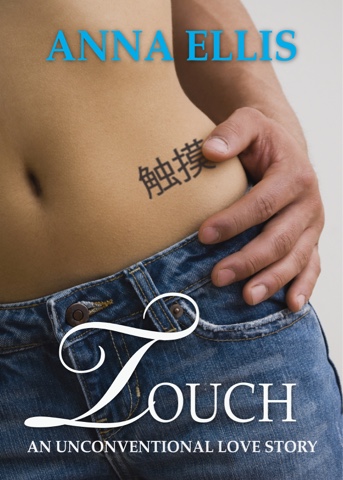 What happens when you fall in love with a man...and his wife?
Touch. An unconventional love story
Kenna never expected to meet the man of her dreams...and his beautiful wife.
Or is it the woman of her dreams and her wonderful husband?
Since her divorce, Kenna has been hiding from the world until a chance encounter brings Iliya into her life. She's never met anyone like Iliya, or her husband Del. Slowly, Kenna begins to open up in ways she never imagined possible.
But as Kenna learns more about Iliya and Del's life together, will she want to be a part of it?
A new series by the author of Husbands and Wives

Amazon US:http://amzn.to/1VRtYS4
Amazon UK:http://www.amazon.co.uk/Touch-Anna-Ellis-ebook/dp/
Amazon CA:http://www.amazon.ca/Touch-Anna-Ellis-ebook/dp/
Barnes& Noble: http://www.barnesandnoble.com/w/touch-anna-ellis/
Kobo:https://store.kobobooks.com/en-us/ebook/touch-60
Smashwords:https://www.smashwords.com/books/view/597026
#Excerpt
Why am I having sex with him?
Because it’s been two years since I’ve let someone touch me.
Why isn’t it better then?
I wish that I was the sort of woman who can give instructions. How hard, how fast, a little to the left… I couldn’t do it when I was married and the two year drought hasn’t changed that fact about me.
I wish I can tell him I’d like him to use his mouth.
Use your mouth…please…right there…
How hard would it be? It’s easy enough for Erik to move his mouth away from my breast, trailing his lips down my stomach, all the way down to that warm little place between my legs where his fingers are currently exploring? The fingers are nice – anything that doesn’t run on a battery is nice – but oh, his mouth would be so much better…
But no.
My mouth isn’t moving to say the words and neither is his.
I switch into one of my Chris Pratt fantasies as I feel my climax slowly approach, as slowly as Erik walked up to me in the bar – you know what’s coming and you’re ready for it to hurry up and get there.  Despite the need for the fantasy, I have to admit Erik isn’t doing all that bad. His fingers are hitting all the right spots but it would be so nice to feel the pressure of a tongue.
What would I know? I’ve had oral sex twice in my life; once with my husband - ex-husband - and once when I was eighteen with a very curious Aaron Mitchell.
Thoughts of Aaron have kept me warm through many a long winter’s night.
I gasp loudly. Erik lifts his head from my breast with a satisfied expression. “Was that good for you?”
What…
He doesn’t give me a chance to protest as he removes his hand and substitutes it for a hard penis, already sheathed in latex.
First of all – when did he put the condom on? And second – I wasn’t finished!
Exactly seven minutes later, he rolls off me. Almost immediately, I fall asleep. Which is a good thing, since I don’t have to lie awake, frustrated with the lack of the almost-was orgasm, but a bad thing because I never intended on staying the night.
I met Erik exactly three and a half hours ago. I wish I could say I really had no intention of having sex with him tonight but that would be a lie.
I picked that bar out of the many drinking establishments in the city with the concrete plan to hook up with someone. It was far enough from my house that I wouldn’t bump into my neighbours (not that I would realize it was a neighbour I was bumping into) and close enough to Isaac’s new place for the slim possibility he might witness my irresistibility to the opposite sex.
Erik had approached me first; I liked his tattoos and he had a nice smile. Plus, he made me laugh, and had a slight resemblance to Chris Pratt (Chris Pratt before the world discovered he had a beautiful six pack under the beer belly).
I’m sure the four shots of whisky I consumed in short order helped with his attractiveness.

Touch is the first book in a new series, and if the next books are as good as this one it promises to be a great series. The book cover calls this 'an unconventional love story', and with what we've seen so far I'd definitely agree with that statement! I like the author's style of writing, and I absolutely love the characters that she's created. The three main characters all have the likability factor, and I'm look forward to getting to know them further in the next book.

Since her divorce Kenna has isolated herself from the world, she doesn't really interact with anyone or have friends - until she meets gorgeous, vivacious Iliya. She is drawn to Iliya, but she also finds herself very attracted to Iliya's handsome husband Del. The more she gets to know them, the more she likes them and she finds herself getting more and more involved in their lives.

This book ended just when things were heating up - I need the next book now! I can't wait to see what the future holds for Kenna, Iliya and Del. Touch receives four out of five stars.

Anna Ellis likes to writes about people (usually happily married) having sex with other people. There's no werewolves or vampires, shapeshifters or tentacles involved - just good, old-fashioned sex. And maybe a little tying up. Or a spanking or two.