Release blitz & 4* review - A Taste of Honey by Ari McKay 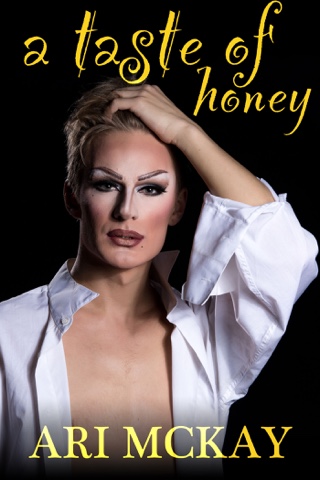 Boone Phillips asks his cross-dressing best friend, Rob "Honey" Coombs, to pretend to be his girlfriend at a family reunion, where he begins to wonder if he's really as straight as he's always believed. When an earth-shattering kiss sends Rob running to protect his heart, Boone has to convince Rob to give him another chance, or his first taste of Honey might also be his last. 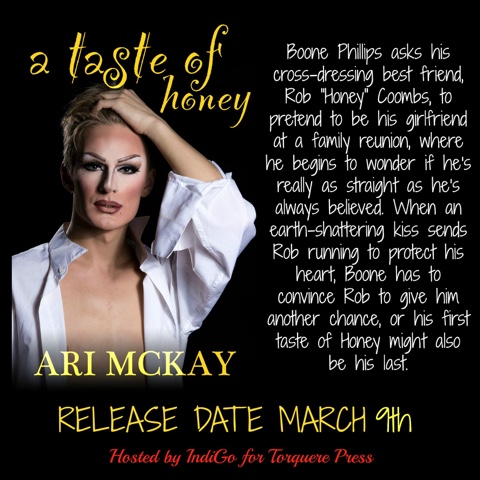 Excerpt
He escorted Honey into the club, which was only about half full. That would change as the night wore on and the dancing got started, but for now they were led to a booth near the stage at the edge of one of the dance floors. Boone seated Honey, then slid in beside her as the hostess handed them menus.

Unlike Rob, Honey didn’t maintain a friendly distance. Instead, she scooted close, aligning her thigh against his, and looked at his menu instead of her own. “How hungry are you?” she asked, gazing at him with an all too innocent look in her wide blue eyes. Up close, Boone could see the artfully applied cat eyeliner enhanced by mascara on her natural lashes rather than the large fake lashes she wore when she performed. “We could start with nachos or maybe the stuffed jalapeno peppers and margaritas, of course.”

“I could definitely use a margarita,” Boone said. He couldn’t drink too much, since he was driving, but he felt the need for a little liquid fortification to get through this date with his sanity intact. He kept having to drag his gaze away from Honey, because he was far too fascinated with examining every detail. “The stuffed jalapenos are good, if you want to start with those.”

“Sure, we can share them. I like a little hot spice, don’t you?” she asked, all innocence, but Boone wasn’t fooled.

Boone stared at Honey, weighing his options. He could go through the evening feeling like he was out of his depth, or he could get himself under control and dish out some payback. He knew why Rob was doing this, after all; he wanted to prove that Boone’s plan wouldn’t work because Boone wouldn’t be able to act naturally with Honey. Even though Boone had already decided that he wasn’t going to go through with the plan anyway, his natural competitive streak had been roused, and he wanted to show Honey—and Rob—that he could give as well as he got. It was a game, after all, and Boone wrote games for a living, so he had to try to see if he could win.

“Definitely. Why do you think I asked you out, Ms. Honey?” he drawled with all the southern charm he had.

“Well, I’d like to think it’s because you have exquisite taste and finally noticed the perfection that’s been under your nose all along.” Honey leaned back and gave him a pointed look. “But we both know this level of hotness is too much for you.”

“This is a level of hotness I never even knew existed.” Boone tilted his head to one side, giving her a wink. “But I think I could get to like it.”

“That’s pretty big talk for a straight boy.” Honey nestled closer and leaned her head on his broad shoulder, and he caught a whiff of sandalwood. “I’m not sure you can walk the walk,” she added, stroking his chest with one perfectly manicured hand.

It’s just a game Honey—Rob—is playing with me, Boone told himself firmly. There was no reason to think of it as being anything more. Rob wasn’t really coming on to him, after all, and it wasn’t as if he had never touched his best friend.

“Oh, you might be surprised,” Boone replied. He slid his arm around Honey’s shoulders and leaned closer, breathing deeply. “I like your perfume. Sandalwood is one of my favorite scents. I think the only thing that’s better is cinnamon.”

He felt rather than heard her draw in a startled breath, but then she relaxed against him. “Does that mean if I wore a cinnamon scented perfume, you’d want to eat me up?”

Boone smiled to himself. One point for me. “Now that is an intriguing idea,” he replied. He’d never been big into flirtation before, but he was starting to think he could learn a thing or two from Honey. “Cinnamon scented Honey. Sounds like you could bottle that and make a fortune.”

I received a copy of this book via IndiGo Marketing & Design in exchange for a honest review.

I wasn't really sure what to expect from this book, but I was intrigued enough by the blurb that I decided to give it a chance. I'm really glad that I did, because this is a great book. A Taste of Honey is a sweet, touching friends to lovers gay romance. It's fun, humorous, entertaining and has a unique storyline which captured my attention from the first page.

Boone needs someone to play the part of his girlfriend at a weekend family reunion to try and keep his matchmaking mother off of his back. He eventually persuades his cross dressing best friend Rob to come with him as his alter ego 'Honey'. Rob has always had a big crush on Boone, but as Boone is straight he knows that nothing can ever happen - until a moonshine fueled kiss blows his mind. To try and protect his heart Rob runs - can Boone convince him to stay and give him a chance?

I don't think I've read a book with a cross dressing main character before, and I was a bit unsure whether I'd like this aspect of the book. I shouldn't have worried though, the author deals with it brilliantly. It's tasteful, sensitive and at times hilarious. Both of the main characters are endearing, I instantly fell in love with them. They make a great couple, they are so sweet together. I really enjoyed this book so it receives four out of five stars.

Author Bio
Ari McKay is the professional pseudonym for Arionrhod and McKay, who collaborate on original m/m fiction. They began writing together in 2004 and finished their first original full length novel in 2011. Recently, they've begun collaborating on designing and creating costumes to wear and compete in at Sci Fi conventions, and they share a love of yarn and cake.
Arionrhod is an avid costumer, knitter, and all-around craft fiend, as well as a professional systems engineer. Mother of two human children and two dachshunds who think they are human, she is a voracious reader with wildly eclectic tastes, devouring romance novels, military science fiction, horror stories and Shakespeare with equal glee. She is currently preparing for the zombie apocalypse.
McKay is an English teacher who has been writing for one reason or another most of her life. She also enjoys knitting, reading, cooking, and playing video games. She has been known to knit in public. Given she has the survival skills of a gnat, she's relying on Arionrhod to help her survive the zombie apocalypse.
Author Links
Facebook Author Page | Twitter | Website | Amazon
Giveaway
Rafflecopter Prize: eBook copy of A Taste of Honey.