Her Deviant Lord by Layna Pimentel

Her Deviant Lord from romance author Layna Pimentel, is the third installment of the Pleasure Garden Follies series. This historical romance features a sexy earl, second chances at love, and plenty of kink for good measure.
Bastian Wycliffe, the Earl of Wendelhem, has finally moved on…or so he thought. En route to a hunting trip after over-indulging the night before, he endures a frightful and terribly embarrassing swoon. He’s seen a ghost and her name is Cordelia Waite, the Duchess of Downsbury.
Mrs. Weylen, formerly a duchess, has a secret. All it took was the chance meeting in the inn that fateful night for her memories to come back and haunt her. She makes haste returning to London incognito with the intent to clear up misconceptions and to deliver an ultimatum to her former lover.
Yet, when a newfound obsession refuses to accept the truth, and her imprisoned husband discovers she’s still alive, their lives and relationship may be in danger. Second chances have never been more precarious. 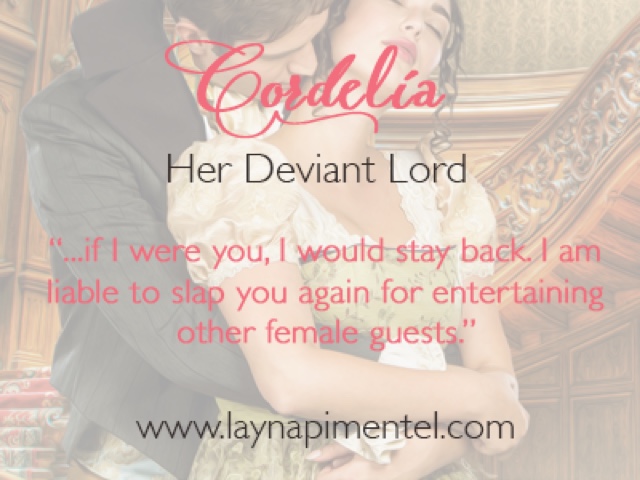 Cordelia nodded as the marquess ran through her instructions. The beautiful, dark blue gown that he and his wife had gifted her with was reminiscent of the style of gown that suited her the most. Since having Matthew, although she had kept her hourglass figure, she was a bit more top heavy as she was still nursing him. The black velvet cape that Isabel had loaned her covered every nuance of her body that would make her recognizable to the ton.
The marquess stepped out of the carriage and helped her down. Cordelia kept her gaze on the cobblestones leading up to Bastian’s door.
“My lord, ma’am. If you will follow me to the library, I will see if my master is up for a visit,” the butler declared with a scowl.
“I hope he is not too busy? We have much to discuss, and it is very important. Let him know that an audience with him is imperative.”
Overly tall and lean, the man had to be near ancient. He furrowed his brows, squinting for only a moment, as if discerning how to deliver—or more accurately, interrupt, Wycliffe. “Very well, sir, please wait here in his library.”
“That went well.”
“That is only the beginning. I wonder…Cordelia, if you were to stand in the corner by that bookcase…” He pointed to the opposite side of the room where it was dark.
She nodded and made haste before anyone walked in on them.
“Perfect,” the marquess commented a short moment before the butler entered.
“His lordship will join you momentarily. He only needs to dress. May I offer you and the lady some refreshment?”
“No, that will not be necessary. I do not plan on staying long.”
The butler bowed and left, Bastian arriving soon after. Cordelia noticed that his hair was mussed at the back. Has he been entertaining a woman upstairs? Has he truly moved on and found another lover? Her heart sank at the prospect. How could he replace me so…so…so…soon? It has not even been a full year.
Her hands trembled beneath her cape, and she could barely stand on her own. How she wanted to throw her arms around him and tell him how much she missed him.
“Thompson! What is so important that it could not wait until morning? Has anything happened?”
“Be easy, man. I assure you, Isabel and Emily are fine. I simply came here to escort a woman who desperately wanted to see you.”
He scoffed. “If this has anything to do with Mary Elizabeth, I—”
The marquess nodded, and Cordelia stepped forward into the glowing light of the fireplace. Bastian turned toward her, and when she lifted the hood of the cape, his eyes widened and his mouth gaped before he crashed to the floor from swooning.
“Oof! I have to admit, I did not quite expect that response.”
Cordelia abandoned her cape where she stood and ran over to him, dropping to her knees. Good heavens! What have I started? The man probably thought he was staring at a ghost. “Wake up, my love!” she whispered as the butler walked in.
“What happened?”
“He just swooned. I have it under control. If he was entertaining upstairs, can you see to the lady and have her sent home immediately? He will need some rest, and I am certain he will want some privacy.”
“Certainly, sir. I shall have her removed immediately.”
So, he was entertaining another woman. How could he… Fury simmered beneath the surface of her calm facade. Why had he never come to confirm if the reports were true? She always knew Richard would never waste a minute on her, but Bastian…They were so close. Kindred spirits. He should have been able to feel, somehow, that she was alive.
Disappointment washed over her. Instead of fawning over his swoon, Cordelia jumped to her feet, walked over to sideboard, and grabbed a bottle of port. Then, she returned to him and began to unscrew the cork.
“Cordelia, what are you doing?”
“Getting him to come out of his swoon.”
“With that?”
“Yes. Do you take issue with my course of action, my lord?”
The marquess stepped away and waved for her to continue.
“If you would rather leave, I am quite capable of waking and caring for him.”
“I will leave the two alone once I am assured you can stay. Though we should not stay too late.”
“And I assure you, my lord, once I have said what I have to say, he will probably want me removed from the premises immediately.”
“In that case, I will wait in the hall for you.”
Once his lordship closed the door behind him, she dumped the bottle of port over Bastian’s face. He sputtered at first, and when his eyes opened wildly, followed by oaths being muttered, he stared at her and jumped to his feet.
“Damnation, woman! You are alive!”
He practically collided into her to embrace her, and all she could do was slap him. Her hand stung from the impact. She instantly regretted her action, but how else was she to express her displeasure at his courting another woman?
Bastian growled at her. “What in the world was that for?”
“That was for not looking for me! And if I were you, I would stay back. I am liable to slap you again for entertaining other female guests.”
“Cordelia…please!” 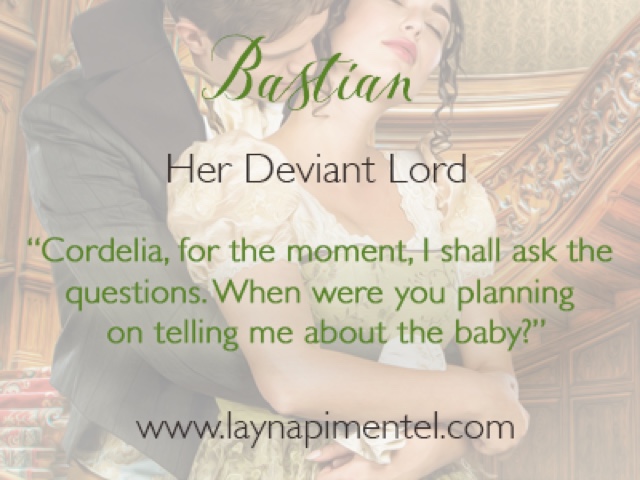