Enter to Win a $25.00 Amazon GC and
Ebook download of ACHING FOR ANNABELL 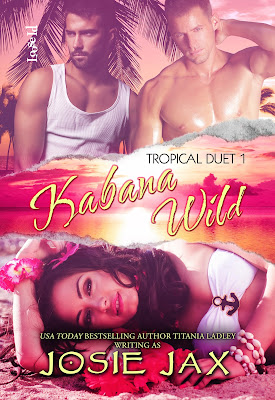 Kabana Wild is fun and sexy ménage romance that I really enjoyed. I loved the tropical setting, the author transported me to this exotic paradise.  It's an easy, thoroughly entertaining read that is perfect for enjoying on a sunny day on a beach somewhere (or in my case on a cold, rainy day in England!).

Movie star Mitch is looking for a way to stop the gay rumours surrounding him, and he finds it when he meets Kiona. When Mitch proposes a marriage of convenience Kiona agrees as it will get her father off of her back. Her father doesn't approve of her boyfriend Nakolo, so this seems to be an ideal smokescreen that will allow her to continue seeing Nakolo in secret. What no one expected was the attraction and chemistry between all three of them. Things get even more complicated when a photographer discovers their secrets and takes a photo that could ruin their lives.

I really liked both Kiona and Nakolo but I wasn't as keen on Mitch, it took me quite a while to warm to him. The dynamics between the three characters was fascinating and I enjoyed reading about their relationship. This is an entertaining book that receives four out of five stars. 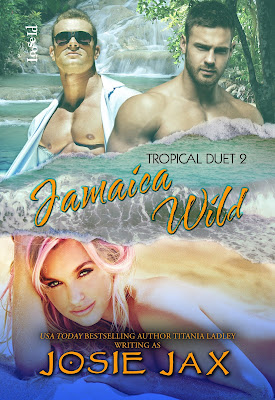 Hiding in plain sight at a nude Caribbean resort with her best friend Keefer seems to be the perfect plan for paparazzi photographer Anjelee while she awaits the blackmail funds to hit her offshore account.

But her plans go awry when Jager tracks her to sultry Karibu Resort and threatens to extradite her back to the U.S. and see her imprisoned for her crime. As PR agent to a famous Hollywood celebrity who Anjelee has blackmailed, Jager's loyalties lie with his employer, movie star Mitch Wulfrum.


As soon as Jager steps foot onto the anything-goes island and sees the gorgeous Anjelee and handsome Keefer living it up in the buff, it's as if Jager's been drugged. Before he can get Anjelee in handcuffs and haul her back to jail where she belongs, Jager finds himself smoldering in the Jamaican heat and entangled in the couple's hedonistic web of lust.

JAMAICA WILD: Tropical Duet 2
The tropical breeze moved through the nearby beach palms and sent a flood of brine-scented, balmy air across their naked bodies. Anjelee lay on a double raft in the roped-off bay designated for swimming, Keefer at her side. Her eyes were closed behind her shades, but the strong sunrays left a pale-yellow curtain behind her eyelids while warming her from her bare breasts to her toes.
About twenty feet away, a woman moaned in the water while a man growled, “Yes, baby, take me. Aw, shit, you’re so fucking tight.”
A svelte woman sunned in the buff in a floating lounger sipping a margarita while one man pleasured her between the legs and another gave full attention to her bulging, fake breasts.
Yet another woman, blonde and naturally buxom, knelt on all fours in the shallow surf at beachside and gave a body-builder-type man a thorough blowjob while a black man entered her from behind. A second female sat on the face of the man receiving oral, dancing and groaning her pleasure.
Almost as if desensitized to all the nude resort’s sexual energy around them, a group of a dozen naked men and women whooped and hollered while engaging in a serious game of sand volleyball. The seaside pool where Jager had first found her playing naked Twister was in full swing just above a low rocky ledge where the cove merged into the open beach. Droves of bronzed bodies frolicked in the pool water, and loyal staff hovered nearby to assist them and monitor for the occasional rule-breaker—like Jager when he’d refused to follow the resort rules and get naked. Laughter and chattering could be heard over the swim-up bar’s buzzing blenders and lively reggae music. Further still, beyond the boardwalk, the terrace dining area with its famous “Naked Parties Pier” buzzed in full lunch mode. She supposed all that sun and sex revved up the appetites. Women in skimpy swimsuits slinked around the many buffet tables and caught the eyes of men and other women alike.
Anjelee sighed. Ah, yes, all in a day’s work and play at Karibu’s hedonistic resort.
Jager.
His name popped into her head as she drowsily soaked up the sun. A shiver went up her spine. He was out there somewhere in the middle of all that sexual energy watching her, she just knew it. Hell, she could feel it. But screw him. She wouldn’t give him the satisfaction of one single, wary look his way even if Keefer did have plans for them to do more than just look at Jager.
The raft shifted, and Keefer’s hand closed over hers. “Let’s do it now, babe.”
She opened one eye to find him on his side facing her, his head, with its slick-backed, dark hair, propped on a fist. Her breath caught in her windpipe. Jeepers alive, the man was so ruggedly handsome, he never failed to leave her breathless. His hand moved in a slow caress up her arm, and wowza, he may as well have stroked her clit. Something hot and liquidy stirred in her womb.
She swallowed to clear the growing lump in her throat. “Do it? Do what?”
“It.” He trailed a finger from her oiled shoulder down over her nipple. Flames shot from her breast to her cunt so lightning-fast, it made her gasp. She slowly opened her other eye and gawked at him through the pale-pink lenses of her sunglasses.
He’d never touched her there before. Hell, for that matter, he’d never touched her anywhere before, not with feeling and the heat of sex driving his hands to do yummy things.
Her voice came out in a breathy whisper. She fought to calm her racing heart. “‘It’, as in…?”
“Don’t play coy with me, Anj. You know what I mean.” He cupped one mound, causing her to arch her back off the surface of the raft. “Make love.”
Make love.
She gulped. Oh, God, those two little words sounded so hot in that deep, all-male voice of his.
“Mmm. See over there?” Keefer urged her onto her side and moved lay along her backside. He reached down and, from behind, gently guided his long cock between the backs of her closed legs. She jolted at first, but then she looked down and saw the head emerge just above her upper thighs and below her pussy lips. Any resistance she’d clung to vanished instantly. A zap of desire shot through her core, and a trickle of her juices escaped her vagina. It dribbled onto his thrusting shaft. “See him? Do you see Jager there on the lounge chair, on the beach watching us?”
Though she could barely keep her eyes open at the sudden passion seizing her, she forced her gaze to search the shore. It didn’t take long to find him where she’d sensed all along he’d been. He had one arm propped arrogantly behind his head, the V of his bronzed, fit torso tapering down to narrow hips. His right leg was propped up, the left bent slightly on the chair so that she could easily see his groin area. His other hand rested on his pelvic bone, and she dragged in a ragged gasp at the sight of his erection and the single thumb he lazily stroked up and down its length. He wore shades over eyes she knew watched them, and a shiver racked her body when he licked his lips and closed his hand around the circumference of his male bulk.
Taunting her. He was taunting her intentionally, the bastard. Why, she didn’t know. He’d made it clear he was here for one thing, and it didn’t include romance or sex, but rather jail for her.
Still, he looked good. Damn good.
“Y-yes, I s-see him.” God, she couldn’t breathe. Could barely talk.

Jamaica Wild is the red hot sequel to Kabana Wild and it is just as enjoyable as the first book. Secrets, lies, blackmail, passion and deliciously dirty sex combine to make this a book you'll be reluctant to put down. It's a fun and sexy read that I really enjoyed.

Paparazzi photographer Anjelee is hiding at a nude resort in the Caribbean with her best friend Keefer while she waits for movie star Mitch Wulfrum to pay her blackmail demands. Things don't go to plan when Mitch's PR agent, Jager, tracks her to the Karibu Resort. Jager plans on making sure that Anjelee is punished for her crimes, but he is sidetracked by his attraction to the gorgeous photographer and her handsome friend and finds himself drawn into their hedonistic lifestyle.

I really disliked Anjelee in the first book, so I was unsure about her being the heroine in this one, but the author and the character soon won me around and I grew to like her. She's a very interesting character and there are many layers to her. Keefer and Jager are also great characters, and boy oh boy are they hot! This is a really fun and sexy book that put a big smile on my face. Four stars. 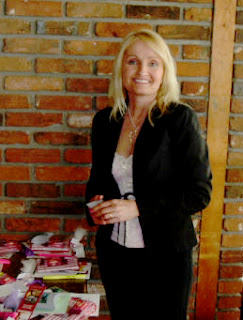 Please visit Josie’s website or feel free to email her at josiejax1@gmail.com.