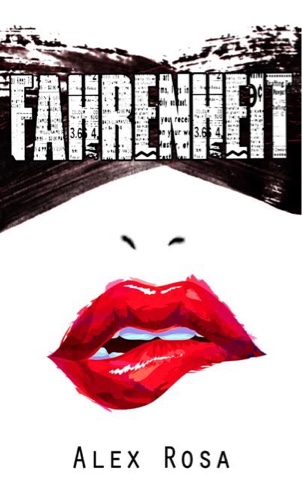 Lauren Michaels is exhausted with the push and pull of copy editing for Los Angeles’s woman’s magazine, Frenzy, which caters to pop culture, style, and above all, sex.

She wants to write for the magazine rather than edit, but her boss is convinced that Lauren’s conservative tendencies won’t fit in with the risqué nature of what Frenzy is about.

Convinced to make her mark, Lauren begs for the chance to prove her self.
Her boss agrees, tasking her with the impossible, in hopes of failure, because although she doesn’t want her to become a journalist, she doesn’t want to lose her as Editor-in-Chief, either.

Her daunting mission? To investigate the growing popularity of sex clubs in Los Angeles, and figure out how the sensual underworld functions.

Out of her element, Lauren starts her search with pen and paper in hand at a local sex shop, hoping she’ll find a trail that leads to the dark lairs of sex and fetishes.

Trying to hide her inexperience, and pretending she’s a professional sex kitten, this trail instead leads her to one brooding, Nathan Sanders.

He’s daunting, charming, and a little too dark and mysterious for her taste, but Lauren knows he’s what she needs as her way in.

What she doesn’t see coming is that Nathan is all too willing to invite her to a nightclub she’s only ever heard stories about, and also the fact that Nathan know’s Lauren doesn’t have a clue what she’s getting herself into.

However, he can’t turn down the idea of helping her out with her research once she confesses the whole story.

This could be fun, they said. There’s no harm in it, they agreed.

Little do they know, a little research can serve up some unexpected results. 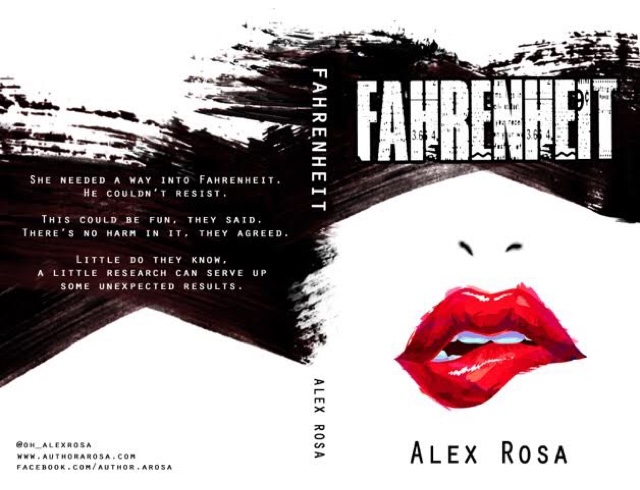 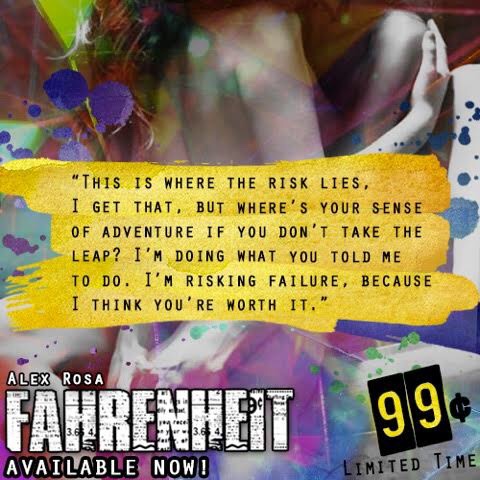 I continue on, in search of a more bearable aisle in this sex shop.

Looking around the shop, I realize I’m alone, and the employee at the front has now busied himself with rearranging the nudie magazines on the wall. It gives me the comfort I need to snoop.

I lift my hand up to a large, purple penis-shaped silicon form. I am tempted to grab it, but I’m a bundle of nerves, so instead I poke at it. My hand knocks it to the floor with a cringe-worthy slap, igniting a loud buzzing sound.

“Shit, shit, shit,” I whisper, watching this wobbling dick bounce around on the linoleum. I’m hopping back and forth, because it’s rolling around as if it’s chasing me.

I have to stop it, right?

I bend down, forced to touch it completely, and the vibration is much stronger in my hands now that I’m holding it. I examine the thing, looking for an off switch to no avail.

I grab for what looks like a necklace my grandmother would have worn with her knitted sweaters. The wooden beads are larger than I would have expected. I lift it off the rack, and I realize it’s not really a necklace, but a string of wooden bobbles. I bring it closer to my face, wondering what the hell—

I gasp, flinging myself back a step at the brash question, but nearly fall over when my vision collides with an electric, hazel-gold stare looming over me. The man who’s asked me this blunt question has a dazzling shit-eating grin on his face, and I want to smack it.

I can’t figure out how I didn’t see this monstrosity of a man among my scouring. I wouldn’t be able to miss him. His dark, 6’4” features beg to be noticed. His ruffled black hair and days of stubble on his jaw are hard to miss, but I can still see dimples under his scruff, which has me deciding against violence for the time being.

I remind myself of my purpose, and examine his penetrating gaze, wondering if he’s the fetish, underworld type.

“Excuse me?” I gasp, going crimson in the process.

I pull in a deep breath when he takes two deliberate steps toward me, putting only twelve inches between us. I’m trying to fathom how I’m in this situation, because I’m positive people leave each other alone in Los Angeles. It’s like an unspoken rule. Heaven forbid we smile when we pass each other on the street.

However, maybe when you’re in a place like this, you invite these kinds of questions. Obviously, they might be into what you’re into. Like a bookstore. You see someone holding The Hobbit in the aisle, you could probably assume he or she likes fantasy, and you could potentially start a JRR Tolkien conversation that the person would appreciate.

When I put the argument together like that in my head, my eyes dart to what is sitting in my outstretched hand. I cringe.

A cluck of laughter escapes me. Yup, like a chicken. Bakawk. I examine the round beads in my hand, noting that the idea of these large round balls entering through an exit is horrifying. I place them back on the rack.

I am so sorry, grandma.

I tilt my head to get a better look at him, and the twitch to the corner of his mouth matches the lift of his right eyebrow.

I look around again, having a hard time holding back another cringe when I realize there’s an inflatable sex doll hanging feet above me.

I shake my head, baffled by my words. When did I get so honest, and when did I decide to take this assignment seriously?

Maybe it’s the opening of this guy’s shirt, showing a little bit of chest hair, that convinces me, or it could be the fact that his eyes tell me he’s playful as much as he’s serious. It’s in the way his stare pulls me in, and then skips to a different surface of my body before pulling me back in again.

The way the word rolls off his tongue screams of possibility, and I don’t know how he’s done it.

“Funny, because I’m always looking for an adventure.”

My brows pull together. I have half a mind to ask him if that means multiple sexual partners, or general life experiences. By the way he fills out his black Henley, I think it’s more like option one.

“I don’t understand how those two go together.”

The corners of his mouth reach from ear to ear, and I get this weird, sinking feeling I’ve just issued a dare. 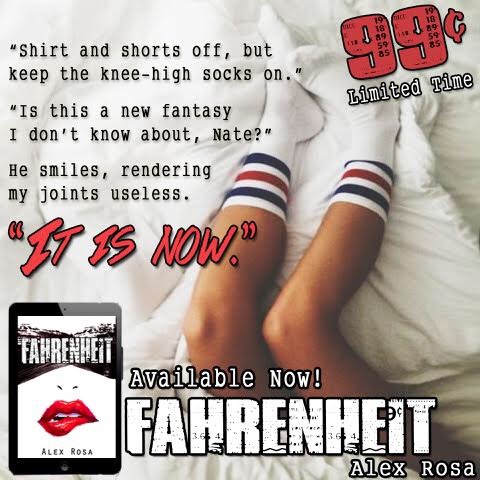 Fahrenheit is such a fun book and it is oh so sexy. It is also hilarious in places, the author's sense of humour is fantastic. The scene where our heroine first meets the hero had me laughing out loud - which lead to me getting some very strange looks on the train! The storyline is interesting and the characters have more depth to them than I was expecting.

Lauren is a copy editor at a women's magazine, but she longs to be a writer. Not wanting to lose her as an editor, her boss sets 'prude' Lauren what she thinks will be an impossible assignment to complete before she'll hire her as a writer - investigate and write about the popular sex clubs in LA. Lauren doesn't shy away from her task, and I really admired her determination and courage. She meets the utterly gorgeous Nathan, and he promises to introduce her to the sexual underworld of LA. What starts out as a game for him, and research for her, soon develops into more.

I really enjoyed this book, it's a fun easy read. I'd definitely read more books by this author, and I'm looking forward to the next book in this series. Fahrenheit receives four out of five stars. 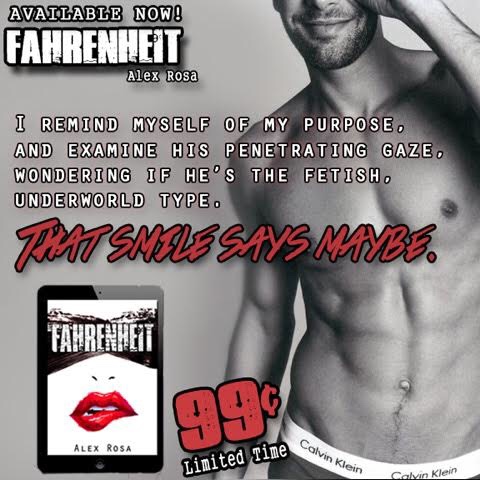 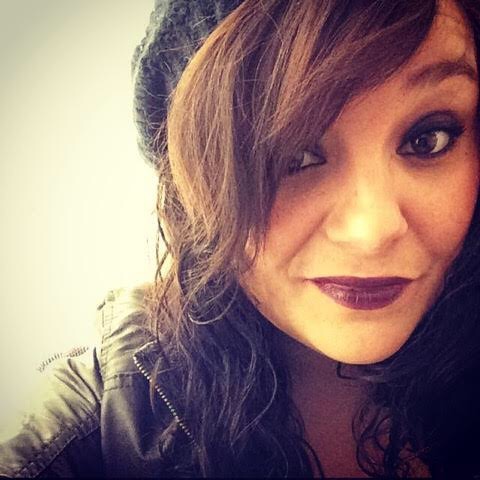 Alex Rosa lives in San Diego, California. When she isn’t scouring city parks or cafe’s to write she is more than likely trying to convince her friends to join her on her next adventure. A sufferer of wanderlust, she is always looking for a new mountain to climb, a canyon to hike, or a plane to board. Her resume consists of coroner, to working at a zoo, and most recently as an executive assistant, but finds her home amongst words, whether it be in books, or in film. Her obsessions are on the brink of bizarre, but that’s just the way she likes it. Represented by Erin Niumata of Folio Literary Management.