Release blitz & 5* review - Showing Him The Ropes by Christa Tomlinson 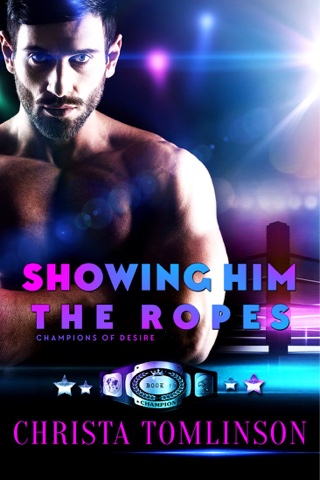 Synopsis
Chance “The Chancellor” Gerhardt is a mainstay for Frontier Professional Wrestling. He’s won multiple championships and has the respect of the locker room. But after ten years at the top, Chance is looking for a new challenge. The one he gets, mentoring FPW’s young rookie, is both unexpected and unwanted.
Devin Jacobs is a hot new talent signed by Frontier Professional Wrestling. He’s always been a fan of The Chancellor, and not just because of the older man’s skill in the ring. He has it bad for the steely eyed veteran wrestler. Unfortunately for Devin, The Chancellor doesn’t believe in mixing business with pleasure, and isn’t looking to get involved with anyone. Or is he? During long nights traveling and working together, Devin catches more than one secretly admiring glance from The Chancellor…
Devin is determined to earn victories and championships in the ring. But he’d also love the opportunity to win Chance’s heart. Can the two of them navigate their way through the hyper masculinity and backstage politics of professional wrestling to the most important victory of all? Or will their shot at love be defeated 1-2-3?
Christa Tomlinson is a lifelong fan of professional wrestling. When she’s not writing, Christa can be found watching her favorite classic matches or traveling to live wrestling events. 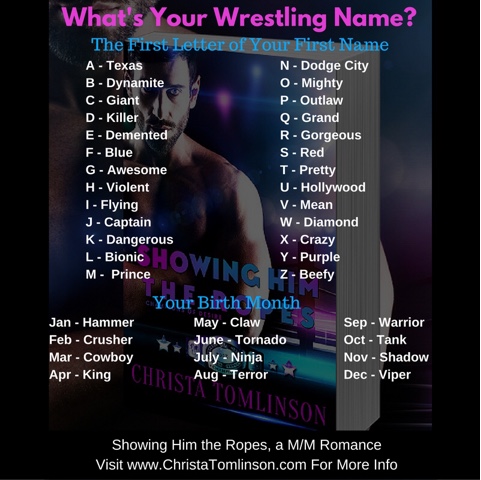 Excerpt
Devin changed the subject again. “So are you married?
“Hell no.”
“Are you seeing anybody?”
“No.”
“Mess around with the ring rats then?”
Chance laughed. “Not even close.”
Devin thought that was an interesting answer. “So do you not hook up with any chicks? Should your gimmick be The Monk instead of The Chancellor?”
“I’m not a damn monk.”
“So then who-.”
Chance cut him off. “This conversation is done.”
Devin sat there quiet for a moment. Chance sounded just like him when he’d been trying to squirm out of admitting he was gay. And it made him wonder. Could The Chancellor be gay as well? “I don’t hook up with any of the groupies either.”
“So?”
“I’m just saying, while we’re traveling together, you won’t have to worry about me bringing any girls up to our hotel room.”
Chance snorted and flicked on the right blinker to get over and exit the freeway. “Trust me, you wouldn’t. Because I wouldn’t allow it.”
Devin laughed as they drove down the exit ramp. “Is that right? What would you do if I did, spank me?” They’d come to idle at a stop light, so Chance turned and looked at him. His face was half in shadow, but Devin saw him run his eyes over him. And his heart started to pound. He knew that look. He'd seen that look plenty of times before - from guys who were interested in him. Seeing it from The Chancellor was the last thing he'd expected. But before he could decide what to say, or if he even should say anything, the light turned green. Chance turned back around to proceed through the intersection...
Purchase
Amazon US | Amazon UK | Barnes & Noble | All Romance | Kobo Books 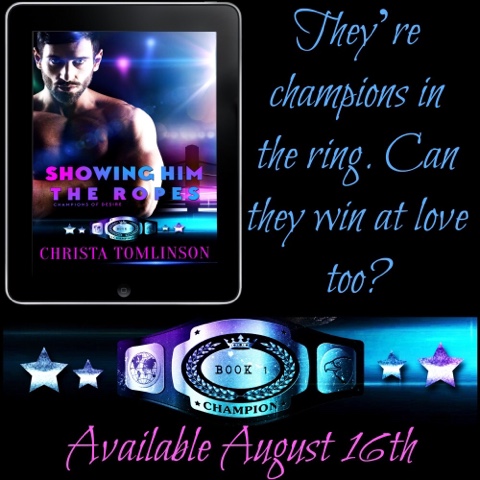 I have been a huge fan of professional wrestling for over thirty years, so I was very excited when I was given the opportunity to review this book. I've read dozens of non fiction wrestling books and wrestler's autobiographies but this is the first fiction book I've read based in the flamboyant world of pro wrestling (although I can think of a couple of autobiographies that were more fiction than fact!). I wasn't really sure what to expect with this book and it far exceeded my expectations - this book is awesome. The wrestling aspects of the book are realistic and brilliantly researched, the author really captured the intricacies of a top wrestling promotion. But this book is about much more than wrestling - it's about two men finding their way together in a testosterone fueled environment with often complex backstage politics.

Chance is a veteran and locker room leader at Frontier Professional Wrestling. He's had a successful career but is looking for a new challenge - and that challenge appears in the shape of Devin Jacobs, a young wrestler who's new to the company. Chance reluctantly agrees to take Devin under his wing and travel and room with him. Devin has always been a fan of Chance, and he's very attracted to the older, burly wrestler. Chance repeatedly turns down Devin's advances, afraid that their fellow wrestlers will find out about their affair. Can Devin convince Chance that a relationship between them could work?

Wow! Chance and Devin were seriously hot together. I really enjoyed the push and pull between the two characters, the chemistry between them was sizzling. They were complete opposites, but they really complemented each other well. I also really liked the supporting characters and I'm looking forward to reading their stories in future books. This story was brilliantly written, it was emotional and the characters felt real to me. I'd definitely recommend this book to other readers, and you don't need to be a wrestling fan to enjoy it - five stars!

I received a free copy of this book from the author via Indigo Marketing and Design in exchange for a honest review.

Meet the Author
Christa Tomlinson is an exciting up and coming author in erotic romance. Her first self-published novel, The Sergeant, was an Amazon Best Seller for Gay and Lesbian Erotica for seven weeks straight.
Although Christa graduated from The University of Missouri-St. Louis with a degree in History, she currently prefers to write contemporary romance. She loves to create stories that are emotional and lovely with sex that is integral to the characters' romantic arc. Her books include straight couples, curvy couples, gay, and multicultural couples. Love is love and everyone should have their story told.
Christa lives in Houston, Texas with her two dogs, and is a retired roller derby player.