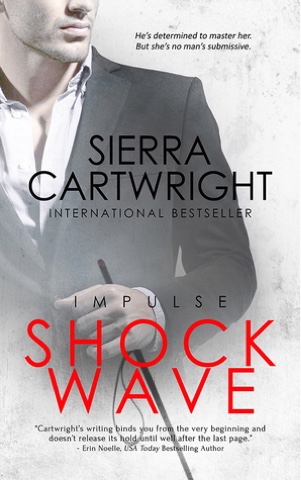 There can only be one victor…  He vows to personally deal with her… When Master Nathaniel Stratton catches Alani Dane, a professional submissive, yawning during a scene with one of his club’s most prestigious members, he vows to personally deal with her. In order to claim her… Nathaniel works to shatter the emotional barriers she’s erected to keep her heart safe and takes the biggest gamble of his life to claim her for his own. But she’s no man’s submissive… He alternately thrills and terrifies Alani. Even though she craves the intense release that subspace brings, at heart, she’s no man’s submissive. In this intense battle of wills, dominance and submission, love and commitment, he’s determined to tear down the walls around her heart.

Master Nathaniel spots professional submissive Alani yawning during a scene with a client and decides to retrain her himself. He works hard to break down her barriers so he can claim her as his own. But although Alani loves the pain he can dish out, she hates having to submit. Can Nathaniel win his stubborn sub's heart and prove that submission can be freeing?

I really liked both of the main characters, especially Master Nathaniel - he is totally swoon worthy! He was very strict and dominant - but also very sweet and caring, he always put Alani's needs first. Their relationship and their journey to happiness was fascinating to read about, I absolutely loved their story. Shockwave receives five big stars.