Thank you for inviting us, the authors of Brit Boys: WithToys, to your blog today, it’s great to be here. This boxed set of M/M stories is very special to us and is the follow on from last year’s Brit Boys: On Boys.

Brit Boys boxed sets feature British characters in British locations and are written by British based authors. Each story is unique, fun and seriously hot! 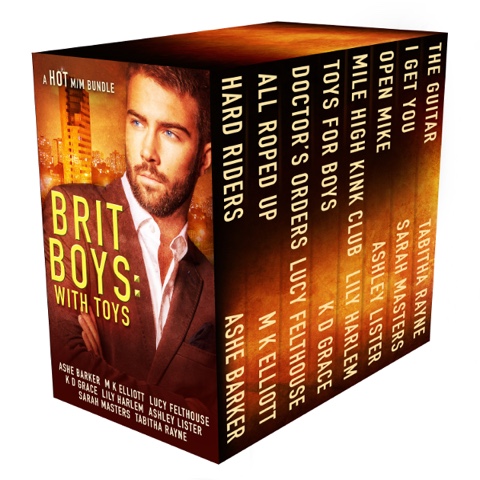 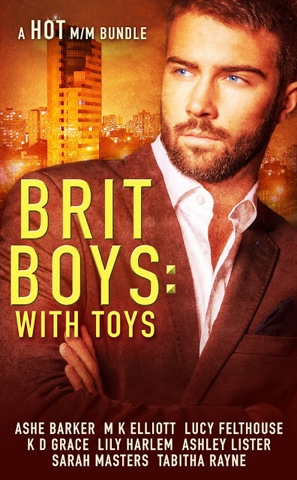 Today the authors are answering this question… What inspired your story in the Brit Boys: With Toys Anthology?

Right from the beginning I knew I wanted my Boys to be bikers. The bridge where they first meet, the Devil’s Bridge as it is known, was built in the 13th century and crosses the river Lune in Kirkby Lonsdale. Bikers congregate there every Sunday without fail and I pass there most weekends so it didn’t take much to get my imaginative juices flowing.

I like to write my male characters in my m/m stories in the same way I write my characters in my regular books. They tend to be alpha males, who will often clash, and what could be more alpha than a bare-knuckle boxer? But I also don’t like everything to be black and white, which is why this alpha male, Conner, also has a softer, more artistic side.

I’m quite the fan of a man in uniform, and I suddenly realised that although I’ve written about quite a few different uniforms and professions, I’d never written about a doctor before. I thought it was time for a sexy doctor and his porter boyfriend to get down and dirty in a supply cupboard.

I like the idea that toys can be anything you have the imagination to use for fun, and I couldn’t think of a better way of demonstrating that than what two blokes walking across England might find along their way with which to … erm … entertain each other.

I adore a show over here in the UK called Dinner Date. It’s set in a restaurant in London, St Paul’s, and is solely for singles to hook up with a potential romance partner, in the blind date restaurant only the staff have ever met before. I decided after watching this with Mr H one evening that a blind date would be a good place for Mile High Kink Club to start.
Ashley Lister

I’d set myself a challenge. I wanted to write a romance but I wanted to set it in an environment where poetry was important. As writing challenges go it was pretty substantial. The characters in a romance are supposed to be brought together through circumstances where one of them is needed by the other: and under what circumstances would anyone ever need a poet? Answering that question was a real challenge.

It was just a case of sitting down and starting to write. Whatever came out was from my subconscious and not a plotted story. I prefer writing that way because when the characters arrive in the page, they’re as new to me as they will be for readers.

A few things inspired the story – I absolutely love music of any sort, but there’s something about being packed in tight among sweaty bodies at a rock concert that really thrills me. The connection you have to the music and everyone who is there can be a very powerful thing – I wanted to add the sexual element of two lovers enjoying music together in this way.

This is a fantastic collection of short, sexy m/m stories, I can honestly say that I enjoyed all of them. All of the stories are about hot men, and their even hotter encounters with some naughty toys. They have varying degrees of heat and kink, but they are all guaranteed to raise your body temperature and get your heart racing.

Hot men in biker leathers, naughty toys and superbikes - what could be sexier? This story really got my motor running - Liam and Jackson are both amazing characters, the storyline was interesting and the sex was HOT! There's a twist in the story that I wasn't expecting, but it brought more depth and emotion to the story. The ending felt a little abrupt, but that was only because I was loving these guys so much that I wanted the story to be longer. Four and a half stars.

Set in the testosterone fuelled world of underground bare knuckle boxing, All Roped up is one of my favourite stories in this boxed set. Journalist Alex arranges an interview with champion fighter Connor in the hope of using him to get an exclusive about illegal betting at his fights. Things don't exactly go to plan when Alex actually likes Connor and they discover that they have compatible kinks, but how will Connor react when he discovers what Alex had planned to achieve with his interview?

I really liked Connor, he had a lot of layers to his character. It took me a little longer to like Alex, but in the end I realised he was perfect for Connor. These two were hot together! This is a great quick read - four and a half stars.

I've read quite a few of Lucy Felthouse's books now and I really like her writing style, so it was no surprise to me that I enjoyed this book. Doctor's Orders is about a couple who have been together for a long time in a D/s relationship. It's hospital porter Aaron's birthday, but as he's at work he's not expecting it to be very exciting - until his doctor boyfriend Blake drags him into a supply cupboard for a birthday treat. I loved the relationship between these two - they may have been together for a while but the spark is still very much alive. This is an enjoyable story that succeeded in putting a smile on my face. Doctor's Orders receives four out of five stars.

Toys for Boys is one of my favourite books in this box set - it is hot, has a unique storyline and  endearing characters. I think this is the first book I've read where the author has written themselves into the story as a character, I wasn't sure about it to start with but it actually works well.

KD Grace is struggling to think of a story that she needs to write for the anthology Brit Boys: With Toys when she meets two guys with the idea for a perfect story - their story! Will and Doc are hiking across the country in awful weather so they can test out gadgets for the magazine they write for. They get off to a bumpy start as they really don't get on - but despite the freezing cold weather things soon start to heat up between them.

This author has one heck of an imagination - if there was an award for the most creative sex toys KD Grace would be sure to win it! Toys for Boys is a very entertaining story so it gets four and a half stars.

I really enjoyed this book, it was fun and sexy with interesting characters. One of its main themes was enforced chastity through the use of a cock cage, which I found surprisingly hot. Rhodri is looking for a submissive to love but has had no luck finding his perfect match so he joins an exclusive dating agency. He soon finds out that it was money well spent as the agency match him with Darius who does indeed seem perfect for him. I really liked Darius, and I am totally in love with Rhodri, he's a real sweetheart. Their chemistry together was strong, and there were some very steamy scenes. I really enjoyed this story so it gets four and a half stars.

Open Mike is a sweetly sexy romance starring two poets, Mike and Ken. When they meet at a poetry night Ken asks Mike for advice on reading and writing poetry - but he soon finds out that there is a lot more that Mike can teach him. It took me a little while to get into this story, but once I did I actually really enjoyed it. Open Mike receives four out of five stars.

I Get You by Sarah Masters - 4 stars

This is another great short story, with loveable characters and lots of heat. Morton is Warren's boss, and they have secretly fancied each other for ages. Warren suddenly blurts out his feelings for Warren and invites him on a trip - I'm not sure which one was more surprised when Morton actually says yes. This is an intriguing story about being true to yourself and being loved for who you are. Morton and Warren are really good together, their chemistry is sizzling. Four stars!

The Guitar by Tabitha Rayne - 4 stars

The Guitar is a sweet story that I thoroughly enjoyed. Kel is shy and kind of awkward, he only feels comfortable in his own skin when he's on stage playing his guitar. He is surprised when he catches of the eye of Damien, he just can't understand what he sees in him. Will Kel's insecurities ruin what could become a special relationship?

I really liked both Kel and Damien and wanted things to work out for them as they were so good together. This is nice short story that receives four out of five stars.

Make sure to follow the whole tour—the more posts you visit throughout, the more chances you’ll get to enter the giveaway. The tour dates are here: http://www.writermarketing.co.uk/prpromotion/blog-tours/currently-on-tour/brit-boys-toys/