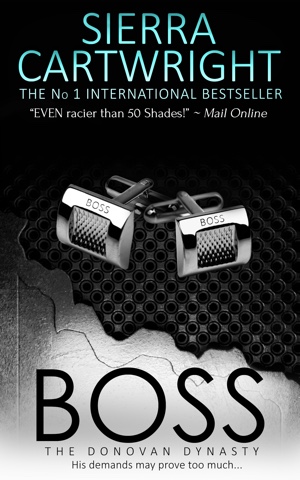 When the fearless, larger-than-life Nathan Donovan becomes her boss, Kelsey Lane’s life is turned upside down. The multimillionaire wants her by his side, but his demands don’t end there.
Kelsey avoids romantic entanglements, especially with overwhelmingly dynamic men like Nathan. But she quickly discovers his attention and sensual desires ignite something deep inside her, leading her on a journey that tests everything she believes.

The youngest, boldest of the dynamic Donovan brothers, Nathan is accustomed to getting what he wants. And he focuses his attention on the smart, sexy Kelsey. He quickly discovers she’s unlike any woman he’s ever known.

She meets him, desire for desire, getting deep inside him, destroying the barriers he keeps around his heart. He wonders, though, if she’s willing to give him the one thing he demands… 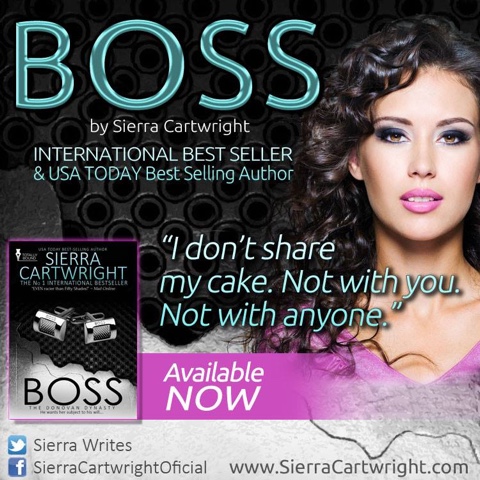 Boss is the third book in Sierra Cartwright's Donovan Dynasty series, and it's my favourite book in the series so far. This book stars the youngest of the Donovan brothers, Nathan, who I'm totally in love with. The main characters had a lot of depth, and I felt connected to them both. The storyline was interesting and the author captured my attention right from the first page.

Kelsey Lane is shocked to discover that she has a new boss, and that boss is the larger than life multimillionaire Nathan Donovon. She doesn't want to like him, but there is something about Nathan that draws her to him. The attraction is mutual and the two grow closer, but will Kelsey end up with a broken heart?

This book is smokin' hot, it is guaranteed to raise your body temperature! The chemistry between Kelsey and Nathan is sizzling, but they aren't just a good match in the bedroom, they fit well together at work and in everyday life too. Boss is a great book, I'm hoping there are more books to come in this fabulous series - I really want to find out more about Nathan's sister, so fingers crossed that she gets her own book soon. Boss receives five sparkling stars.

She invites you to join her on a sensual journey where the limits are explored and expanded.