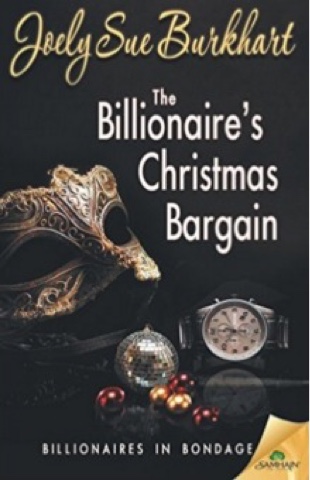 A billionaire for Christmas…tied up in a bow.
Billionaires in Bondage, Book 3
The Recluse: Ever since his parents died in a holiday car accident, Harvey Caine has shut himself away with his lingering injuries and his guilt, hating Christmas more with each passing year. Clinging to the one obsession that keeps him alive—wrest control of Caine Enterprises from his aunt.
When his longtime friend mentions a niece who needs a job and a roof over her head for a few days, Harvey agrees, figuring his mansion is large enough to ignore her.
The Maid: Professional BDSM Mistress Kelsey Marley doesn’t do “ignored”. She’s been hired to do what she does best—push the billionaire’s buttons until his defenses crack. The paycheck will buy her dream of owning her own bar.
The Figgy Pudding Thickens: As Kelsey administers the discipline Harvey needs to release his pain, she realizes too late they’re getting too close, too fast. If he finds out she’s been bought and paid for, this holiday might go down in his ledger as a big fat loss for them both.
Warning: Contains a wounded hero who never backs down from a challenge, and a badass mistress who doesn’t flinch from his scars, laughs in the face of his temper tantrums, and has no problem administering a much-needed spanking.

Harvey Cain lost his parents in a car accident that also left him with physical and mental scars.  He has become a recluse and hasn't left his gloomy mansion for years. Family friend Maxwell has tried everything to help Harvey but nothing has worked, so he comes up with a dramatic plan to hire a professional Domme to see if submitting to her will help him.  Kelsey enters the household pretending to be Maxwell's niece who needs a few weeks work. As she begins to break down Harvey's walls she develops strong feelings for him.  But how will he react if he discovers that Kelsey's services have been bought and paid for?

I must admit that I have a soft spot for grumpy, irritable heroes, especially when they are paired with a strong heroine who is intent on melting the frost around their heart. And you can't get much grumpier than Harvey! I just loved his grumbling and how he tried to hide the joy that Kelsey brought to him behind his grouchy mask. Yes he's spoilt and arrogant, but Kelsey helped us to see through Harvey's hard outer shell to the good man beneath.

I received a copy of this book in exchange for a honest review.
Posted by Unknown at 07:00