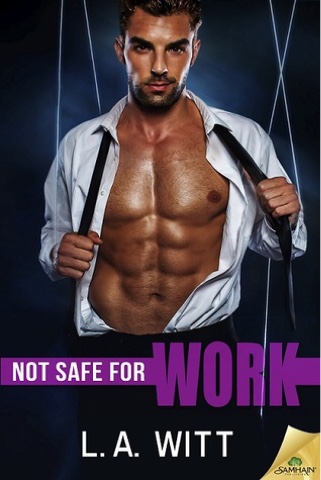 They’re a match made in the dungeon…until their secret gets out.
Bored senseless in a meeting, architectural modeler Jon McNeill amuses himself with a kinky dating app on his phone. Then the app matches him with another user…who’s six feet away. Suddenly Jon finds himself on the same page as someone way above his pay grade: millionaire property developer Rick Pierce. His firm’s biggest—and hottest—client.
The app isn’t kidding either. They’re a perfect match. Jon’s a Dom, Rick’s a sub, and bondage is their thing. Both guys are well into their forties, know their way around the bedroom, and definitely appreciate a good suit. And the best part? They’re a match outside the bedroom too.
But office relationships aren’t easy to keep a secret. When the truth comes out, Jon is certain he’s about to get fired. Instead, his bosses throw him a curve ball—an ultimatum that puts both his job and his relationship in jeopardy.
Warning: Contains literal and figurative sex machines, blindfolds, a sub being punished during a business meeting, enough rope to tangle up a millionaire, and a Golden Girls marathon.

Not Safe For Work is an entertaining and seriously hot m/m BDSM romance. The thing that I most liked about this book was that the main characters were in their forties, it was so refreshing to read about older characters with normal problems. It was also nice to have two characters who communicated well and actually talked to each other about their problems. The only slight negative I can find was that the middle of the book felt a little slow, but the story soon picked back up again. I've read three books by this author now, and this one is by far my favourite - I'll definitely be reading more of her work in the future.
Jon is divorced, struggling to put his three children through college and feels under appreciated at work. During a boring meeting he logs onto a kinky dating app and finds out that his perfect match is sitting just six feet away from him! Rick is a super important client of the firm that Jon works for and is way out of his league. But when they meet up and start to explore Jon discovers that Rick really is his dream submissive - and he is the Dom that Rick has spent forever searching for. But when Jon's bosses find out about them they issue him an ultimatum that could mean the end of their relationship.
The story is told entirely from Jon's point of view, and I must say that I absolutely loved him. He really is a good guy, he's adorable - not that a Dom would appreciate me calling him adorable! Rick was really sweet too - a hard ass in the boardroom but a (slightly bratty) sub in the bedroom. The connection between them was strong and their chemistry was sizzling. The bedroom (and dungeon) scenes were amazing, they were very hot and very enjoyable. There were also some hilarious moments, thanks to Jon and his work mates. Their banter and antics in the NSFW zone were brilliant. This fabulous book receives four and a half stars.

I received a copy of this book in exchange for a honest review.
Posted by Unknown at 06:00