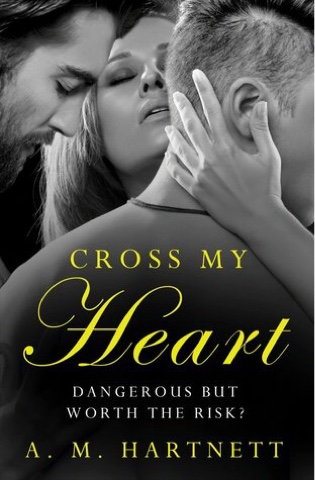 Dangerous, but worth the risk?

He wanted a lover who wouldn’t hurt Evie, but as he watches his woman writhe with the ecstasy another man gives her, it becomes clear that Seth isn’t the one Evie needs to worry about leaving with a bruised heart. Sharing the control in bed was the easy part. Losing control of his emotions could destroy what he has with Evie.

Cross My Heart started off well and I really enjoyed the first fifty to sixty percent, but then it lost its way for me. Unfortunately it didn't manage to keep my attention all of the way through, and I struggled to finish it.  Its hard to say exactly why I didn't love this book, but it definitely didn't help that I didn't really like the hero of the book, Ryan.

Evie and Ryan have been dating for a few months and have decided to fulfill Ryan's fantasy of bringing another man into their bedroom. Their ideal guy proves to be elusive, and they begin to think they won't find anyone, but the man for them could be closer than they think. Their landlord Seth surprisingly ends up joining them, but can Ryan handle his jealousy, and will people end up getting hurt?

As I said before, I'm not a huge fan of Ryan, he just seemed a bit selfish, insecure and immature. Seth really appealed to me though, he is a great character. The story is told alternately from Ryan and Evies's point of view which was good, but I would have liked a chapter or two told from Seth's point of view so that we could get to know him better. The sex scenes in this book were great, and the MMF scenes were especially hot. Evie and Ryan enjoyed a bit of kink, and this made for fun, steamy reading.

Cross My Heart is a hot book, but I would have liked there to be a bit more to the plot, so I give it three out of five stars.

I received a copy of this book via NetGalley in exchange for a honest review.
Posted by Unknown at 14:37