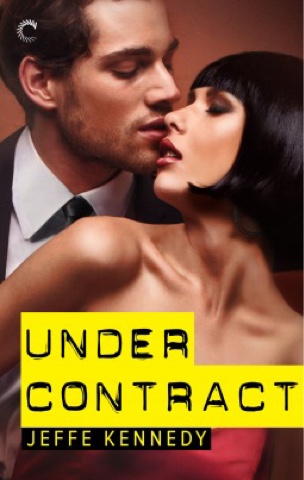 The kinkier the sex, the higher the price tag…

Ryan Black has admired Celestina Sala from afar for years, her lush body and sensual nature calling to the dominant in him. For just as many years, Celestina was off-limits—married, proud and self-sufficient. But all that has changed, and now Celestina is in debt and in need…and available. Ryan proposes a contract: he'll pay off her debt if she gives herself to him in bed, yielding control in exchange for the pain and pleasure he'll bring them both.

There are words for women who take money for sex, and none of them are nice ones. Celestina never thought she'd have to sink this low, but giving up control sounds more enticing than ever before. And suddenly it's not about having to give in to Ryan. It's about wanting to.

But when Ryan's dark past comes to light, they may both be in over their heads. The terms of his contract say her body is his…but her heart may be another story.

One thing is for sure—now that Ryan has Celestina, he can never let her go.

Under Contract is a great read with a fun, kinky twist to the usual pretty woman type of story. It is a sensual, passionate story with lots of hot and dirty sex. This is backed up with realistic characters and an interesting storyline.  It is well written and the story flows well throughout the book. This is the first book I've read by this author, but it won't be the last.

Celestina is down on her luck. She's recently divorced, her sister tragically died leaving Celestina to bring up her teenaged daughters, she's drowning under a mountain of debt and she's just lost her job. When she runs into a former client, she's shocked when he offers her a chance to earn the money she desperately needs. Ryan would have given Celestina the money she needed, but he knows she would turn him down, so he comes up with a plan that gives her the money and gets him close to the woman he's long desired. Basically Ryan will pay her for spending time with him and for sex - the kinkier the sex, the more money she gets. Initially reluctant, she finds herself beginning to crave the pleasure Ryan can give her. But as they get closer, his past threatens to push them apart.

I liked how Ryan wasn't the usual gorgeous, muscled hunk and that he was a real, 'normal' guy - just a very rich one! I initially found Celestina a bit needy, but as we got to know her better I could understand her behaviour. I loved her teenaged nieces too, they were real characters and added to the story. I enjoyed the unusual way the couple decided on their scenes, with Celestina selecting what she wanted to do on a custom made tablet app. This was a fun, modern idea that I hadn't come across in other stories before. Overall I really enjoyed this book, it's a fun and sexy read. Five stars!

I received a copy of this book in exchange for a honest review.
Posted by Unknown at 05:00