Release blitz & giveaway - Mastered By My Guardian by Opal Carew 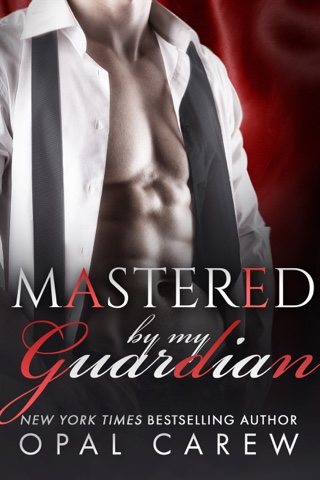 #Synopsis:
Chelsea spent the past ten years rebelling against Zane’s control. When their parents died, he became  her guardian, controlling her trust fund and the company they shared. But hating the control he exerted on her did nothing to stop her from wanting him.

When she refuses to obey his summons for a weekend meeting, he cuts off her money, leaving her in a strange city with no way to pay her hotel bill. Forced to accept his help and join him at his country house, she soon discovers his intention is not strictly business.  When she experiences his potent masculine domination she finds the reality of being with Zane far exceeds her fantasies… leaving her wanting more.

#Excerpt
Chelsea opened her eyes to the close-up view of a strong masculine jaw, heavily shadowed with morning stubble. She seemed to be wrapped around the owner of that jaw, her arm snuggly around his waist and her leg curled around his thigh. His hard, muscular thigh.
God, how had she wound up in Zane’s bed?
Staving off the panic, she decided to slowly pull away without waking him, then she’d slink out before he knew—
The arm she was lying on tightened around her shoulders.
“Are you awake?” she whispered.
“As a matter of fact, I am.”
Damn. She’d hoped his arm tightening around her was just a reflex and she could still escape.
She tried to roll away but his arm was like a steel band holding her in place. Then he rolled toward her, causing all kinds of wild sensations to flicker through her.
Now they were facing each other on the pillow and her heart stuttered.
Oh, God, so many times she’d dreamed of this, but now faced with the reality… Knowing the tensions between them…
Then the memory of last night, when he’d mentioned something about their roles changing…
“I don’t understand,” she stammered. “I don’t know how I wound up… here.”
God, she was in his bed. And it was his bed, not hers, with the forest green sheets and the navy and green patterned duvet. It was a huge, king-sized bed. Big enough for his huge, king-sized body. A tall, masculine muscle-bound body.
“You climbed in here in the middle of the night.” The light dancing in his eyes made her wonder what else she’d done in the middle of the night.
“We didn’t…” Her throat closed up and she sucked in a breath. “I mean… nothing happened did it?”
He arched an eyebrow. “You mean you don’t remember?”
Blood rushed to her cheeks and her eyes grew wide.
“Oh, God. No. We didn’t.” Her heart pounded in her chest.
His clear blue eyes grew serious.
“Don’t worry. Nothing happened. But…”—he stroked a finger lightly across her cheek, sending her insides fluttering—“would it really be so bad if it had?”
Relief rushed through her, but his blue eyes held her mesmerized.
“I… uh… It’s just that…” Oh, God, she didn’t know where to go with this.
Then suddenly his mouth was on hers. His firm, full lips coaxing. He drew her closer and the feel of his body the length of hers, his tongue nudging at her lips, sent her pulse skyrocketing. She opened and he glided inside. She melted against his solid body as their tongues entwined, his mouth moving on hers in a passionate play of power where he was totally in control.
And she was loving it.
MeettheAuthor
As a New York Times and USA Today bestselling author of erotic contemporary romance, Opal Carew writes about passion, love, and taking risks.  Her heroines follow their hearts and push past the fear that stops them from realizing their dreams… to the excitement and love of happily-ever-after.
Opal loves crystals, dragons, feathers, cats, pink hair, the occult, Manga artwork, Zentangle, and all that glitters. She earned a degree in Mathematics from the University of Waterloo, and spent 15 years as a software analyst before turning to her passion as a writer. She grew up in Toronto, and now lives in Ottawa with her husband and three cats.  One of her sons just finished a Masters degree at Sussex University in the UK and is now pursuing a second Masters at Carleton University in Ottawa.  The other son just finished his undergraduate degree at Carleton University.  Yes, mom is proud!
#SocialLinks
http://www.OpalCarew.com
http://bit.ly/OpalsBlog
http://www.opalcarew.com/newsletter.php
http://www.facebook.com/OpalCarewRomanceAuthor
http://twitter.com/OpalCarew
http://www.pinterest.com/opalcarew/
http://www.goodreads.com/author/show/206712.Opal_Carew
http://www.amazon.com/Opal-Carew/e/B001JSEDX2