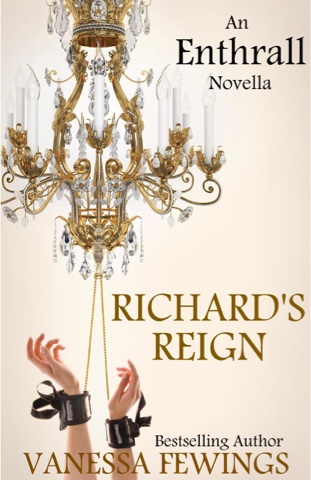 Richard Booth, best friend of billionaire Cameron Cole and senior dominant at the elite BDSM club Enthrall, will attempt to prove to the women he loves and the enemies he loathes that he is a force to be reckoned with.
His life starts to change when Andrea Buckingham, a gorgeous, fledgling Hollywood starlet, coerces him to introduce her to the BDSM subculture and the unique, controversial services offered by Enthrall. The intense pressure of a celebrity lifestyle and having to carry a blockbuster movie has taken its toll on Andrea’s delicate psyche.
What this woman needs is discipline and liberation.
What she needs is Enthrall.
Who she needs...is Richard Booth.
#MeettheAuthor
Vanessa Fewings is the bestselling romance author of the highly acclaimed Enthrall Sessions.
Vanessa is also the author of The Stone Masters Vampire Series. Prior to publishing, Vanessa worked as a registered nurse and midwife. She holds a Masters Degree in Psychology. She has traveled extensively throughout the world and has lived in Germany, Hong Kong, and Cyprus.
Born and raised in England, Vanessa now proudly calls herself an American and resides in California with her husband.
Facebook: https://www.facebook.com/OfficialVMK
Literary Agent: Trident Media Group
#SocialLinks
Website:https://www.vanessafewings.com/
Facebook:https://www.facebook.com/OfficialVMK?ref=hl
Twitter:https://twitter.com/VanessaFewings
Goodreads:https://www.goodreads.com/author/show/1507905.Vanessa_Fewings
Newsletter:https://www.vanessafewings.com/subscribe.html
Google +:https://plus.google.com/u/0/+VanessaFewings/posts
Pinterest:https://www.pinterest.com/vmkfewings/
#Excerpt

FREEFALLING.
Adrenaline spiking my veins.
Just how I liked it.
Wind whipping my clothes, this rush of air, the peacefulness of nothing.
Thoughts dissipating.
Gravity owning me as the ground drew near.
Skydiving, the wind blasting my face, my body pummeled, death nipping at my heels and the arrogance of knowing I’d survive.
Those painful thoughts returning and my inability to outrun them, or even outfall them, reminding me I’d messed up again.
And lost my lover to another man.
The same arrogance that had led me to pursuits like this. The same trust that made me believe giving my girlfriend to my best friend to train was a great idea. A stellar endeavor that was supposed to turn out a world-class submissive. After all, this brilliant dominant who I’d entrusted her to was renowned for his unique talent that turned our lovers into legends. He was also the same person who’d pulled me back from the brink time and time again, saving me in Dr. Cameron Cole’s own indelible way. His psychological craft so effective that those of us who endured his special brand of therapy survived it with a sense of having saved ourselves; a profound statement of his brilliance.
Though genius was not without consequence.
This morning I’d told Mia goodbye.
Left her outside Cameron’s Malibu beach house knowing full well he loved her more than me, and he was fatefully waiting inside.
No, it wasn’t that he loved her more…he loved her differently. The kind of passion I’d never seen in Cameron before, the kind that made him willing to give her up for me.
Cameron and I shared an endearing “bromance” – a connection as strong as brothers. Cameron had counseled me back from the edge of madness, back when my life was all about my father’s betrayal and my fiancée’s suicide. I’d been there for Cameron, too, when his life had spiraled after his fiancée Zie had betrayed him and he’d called off their wedding. Together we’d gone on the ultimate bender at Chrysalis which had left subs in our wake, giddy and sated. Cameron, me and Shay – our club’s head of security – had drunk and fucked our way into mythic status.
Cameron had always been such a private man. A good man. So, I threw myself onto my sword and gave him what he deserved: The love of his life – the woman who was meant to be mine.
I’d lied to myself that Mia would come round and learn the ways of a high-class submissive and enjoy being subjugated as she bowed down to me as her master. She only responded to Cameron like that. Proof that her soul had bonded with his…that only one man could truly set her free.
I’d had no choice but to shake my bad boy ways and do the right thing for once. Even if it meant my heart was going to be ripped out of my chest. Getting over her seemed impossible.
The strike to my back sent me spinning.
A flash of a face.
Brendon, my skydiving partner, yelling…something about pulling my cord. Something about deploying my emergency line.
He shot up and that white cloud of a parachute billowed behind him, sending him rising.
Yeah, good point.
My flesh crawling as I realized the danger.
Fuck.
Plummeting. Spinning. So close to blacking out.
My hand tugging, slipping off and trying again, my breath stuttering to fill my lungs with the air it forgot it needed. The cord ignoring these frenzied attempts, palms sweaty, fingers numb as they fumbled.
Unable to tell which way was up or down—
Refusing to give up, forming my body into a D-arch to slow my rate.
Fucking death in the mouth as the ground came up fast.
A yank backwards and I flew upwards, my canopy cordial enough to respond to that final frantic tug and blasting open, slowing my descent.
Silence surrounding me.
The patchwork ground now a solid color of dark green and fenced off boundaries becoming smaller.
With legs bent, my feet hit the dirt hard and I tumbled into a sprint until the parachute’s drag rescinded. I leaned forward, both palms resting on my knees as I sucked in adrenaline- drenched breaths.
My grin widened.
Standing tall I howled my joy.

Richard's Reign is the first book I've read in the Enthrall series and I really enjoyed it. I admit that I was a bit confused at the beginning as I didn't know anything about Richard's background and previous relationship, but I soon worked out who was who and was totally hooked. This book is intensely sexy with an intriguing storyline and great characters.

This is quite a short read, but it sure packs a powerful punch. It succeeded in keeping my attention right until the end, I couldn't put it down. I really liked the characters in this series, they are an intriguing bunch. I'll definitely be looking out for more books in this series, as this was a great read. Four stars. 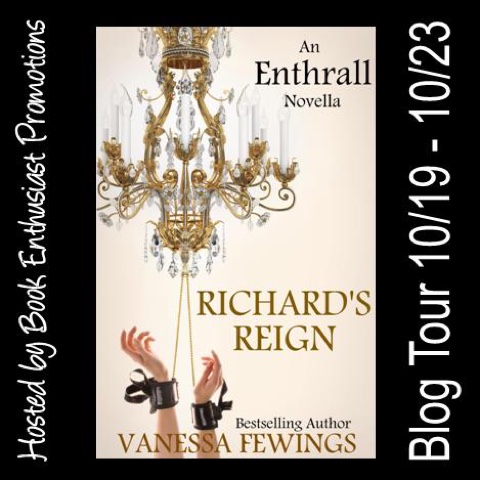