As Natural As Breathing by Thianna D 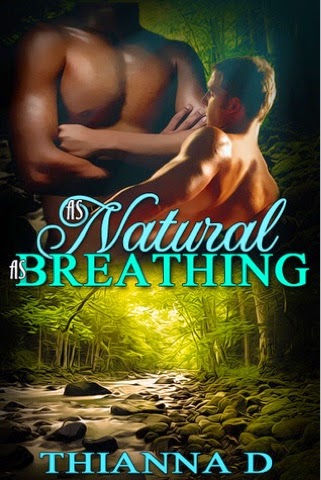 For Christian Darringer, life isn’t worth living. Just back from the Middle East; scarred and with permanent damage to one leg, he does not think anyone will want him for anything. Meeting a gorgeous man he finds himself thinking about constantly is not in his plans. Pulled toward the startling younger man with striking blue eyes, he begins to question a lot of things – especially his sexuality. Not one to hide from a challenge, he plunges ahead only to find himself more than just attracted to Logan who is full of life and joy, he finds himself head over heels in love.

Logan Mannette has almost everything he ever wanted: loving parents, happiness, friends and security. The only thing missing is finding the love of his life, a love that is just like his parents’. When he meets Christian at a party, everything changes. Instantly attracted, he does his best to help this sad man and quickly finds himself feeling more than he has ever felt before. Raised in a domestic discipline household, he holds that ideal as what he wants but his interest in spanking became a fetish and when Christian admits that he wants to be spanked, Logan believes he might have found the perfect man.

Just as everything begins for them, Christian’s past intercedes and one of his brothers makes waves about him dating a man. If it weren’t for Logan’s support, he might fold; but with the love of one amazing man, Christian finds that living his life rather than just existing is as natural as breathing.

As Natural As Breathing is the first book in the All They Ever Needed trilogy, and I absolutely loved it.  The two main characters were really endearing, I quickly fell in love with both of them.  I found the writing style easy to read and I felt that the story flowed well.  When I got to the end I was a little disappointed as the story felt unfinished, but I was happy again when I realised that Christian and Logan's story continues in two more books.  I can't get enough of this couple, so I plan on reading the rest of their story in the near future.
Christian returns from war a totally different man from the one who left.  A horrific friendly fire incident has left him with mental and physical scars.  He is also trying to come to terms with his sexuality after discovering he is attracted to both men and women.  He is depressed and rarely leaves the house until he meets a gorgeous ray of sunshine dressed as Santa. Logan (aka Santa) is instantly attracted to Christian and wants to put a smile back on his face.  But can he cope with having a relationship with a man who is is the closet?
The interaction between Christian and Logan felt very natural and was fun to read.  Logan was such a positive character, infact his whole family always seemed to be happy and his parents were great role models.  Christian was so sweet, you couldn't help but feel for him after everything he'd been through. This book had some very hot moments, I really enjoyed the spanking scenes.  They were more for mutual pleasure than for punishment, so it wasn't really a domestic discipline relationship (although it may develop into one in future books).  Either way they were great to read!
I really enjoyed this book and I look forward to seeing what the future holds for Logan and Christian.  Five stars.
Posted by Unknown at 12:06