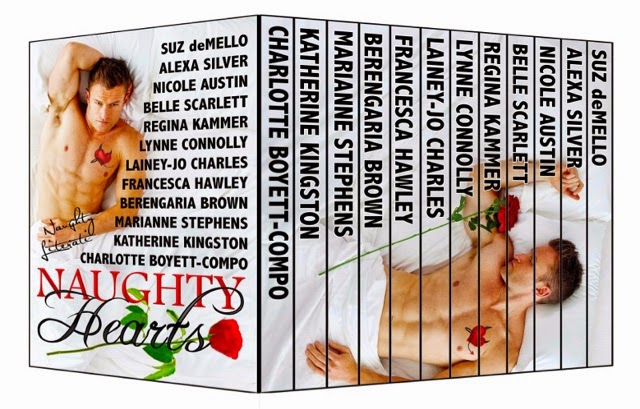 The Naughty Literati are back with a new boxed set—their third.

Who are the Naughty Literati, you ask?

Check out the NL site for a rockin’ contest and enter to win a Kindle Paperwhite full of great reading from our bestselling contributors. 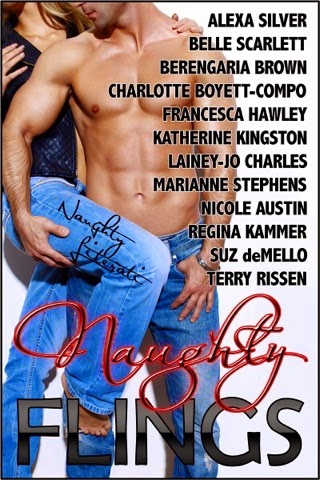 Here’s a snippet from Suz deMello’s hot hot hot new story, Spring Training, in which a baseball pitcher gets very special, very private training from his team’s gorgeous new trainer. Terri’s romance with player Chase McCall will get your heart racing and your toenails curling!

Though the hotel’s dining room was crowded with players and fans, Chase managed to score a relatively quiet table with a fake palm on one side and a curtain on the other. While he waited for Terri to show up, he battled the demons in his head.

But she’s the new trainer. If we fool around and things go wrong... He shuddered.

A few words to management from Terri like, “Chase McCall? He used to be good...” and he’d be off the team, his career shattered.

A hush fell over the crowded, noisy room. He heard a player say, with reverence in his tone, “Holy shit, she sure cleans up nice.”

Chase stood and looked toward the door. Yeah, she sure did clean up nicely. Her slim, unadorned dress allowed her natural beauty to shine, as did her lack of makeup, which showcased glowing, perfect skin. Shiny brown hair swept her shoulders. She was so gorgeous that his eyes ached just looking at her.

She strode toward him, smiling. He had a brief vision of her doing the same thing. Naked. Tits bobbing, hips swinging... He bet she was a firecracker in the sack. All that confidence oozing outta her was sexy as hell.

He helped her into a chair, then slumped into his. He hummed along with the jazz band playing in the adjacent bar. I’ve got it bad, and that ain’t good...

He raised his head and saw her nodding in understanding. “If it’s any comfort... Me too.”

He rubbed his face. “At least we can both be adults about it, talk about it.”

“Yep, well, you’re totally distracting, and sex would be even more distracting.” Terri’s tone was firm, matter-of-fact. She tapped fingertips against the linen tablecloth. Was she edgy, too?

“And it would be a terrible career move for me.”

She frowned and even looked a little offended. She opened her mouth to speak, but was interrupted by a server bustling over to their table. “What can I get you folks to drink?”

“Prosecco, please.” Her tone was brisk and assured, as usual.

Despite another flare of desire, Chase focused on the matter at hand. “I’d like a glass of red. Do you have any California pinots?”

“We have an excellent Rombauer Zin that’s comparable, sir.”

The server put dinner menus onto the table and left.

He eyed Terri. “What did I say that was so bad?”

“Why would an affair with me be a terrible career move? Being with the trainer—that would be smart, wouldn’t it?”

“Not if it didn’t work out. And it could be interpreted as sexual harassment.”

She smiled. “But who’s harassing whom?”

“Men are usually thought to have all the power in this situation,” he said slowly. “But here...you’re the one in control.”

She grinned at him. Jesus fuck, this woman is sex on a stick. She said, “Have you ever thought about giving up control?”

She didn’t say anything. She just licked her lower lip and smiled, a sinful glint in her eye.

“Screw dinner.” He tossed a twenty on the table for the drinks and stood.

Like what you read? Score a copy of Naughty Flings here: http://indi.uno/1EaiEqB

Want some free naughtiness? Naughty Hearts, a previous anthology, is free from May 12-16! So if you like your romance spiced with a little naughtiness, go for it! 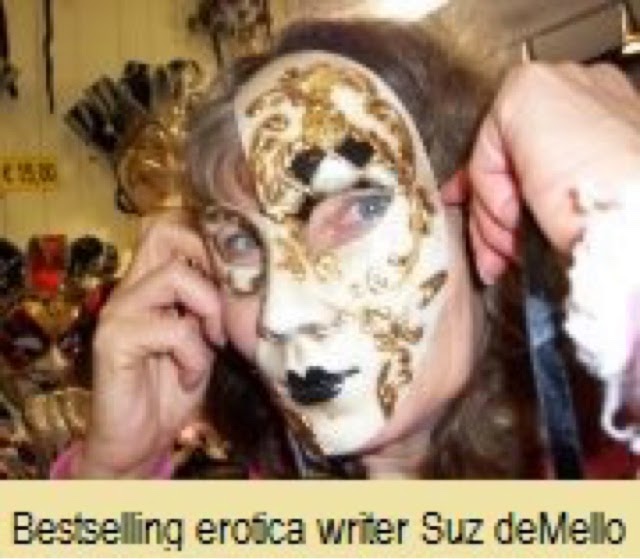 Best-selling, award-winning author Suz deMello, a.k.a Sue Swift, has written nineteen books in several genres, including nonfiction, romance, erotica, comedy, historical, paranormal, mystery and suspense, plus a number of short stories and non-fiction articles on writing. Her books have been favorably reviewed in Publishers Weekly, Kirkus and Booklist, won a contest or two, attained the finals of the RITA and hit several bestseller lists.

A former trial attorney, her passion is world travel. She’s left the US over a dozen times, including lengthy stints working overseas. She’s now writing a vampire tale and planning her next trip. 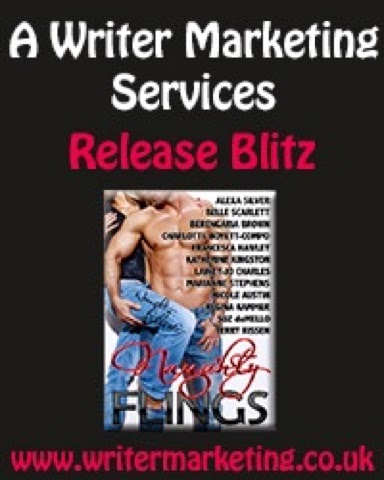