Pre-order blitz & giveaway - A Vixen in Venice by Kate Deveaux 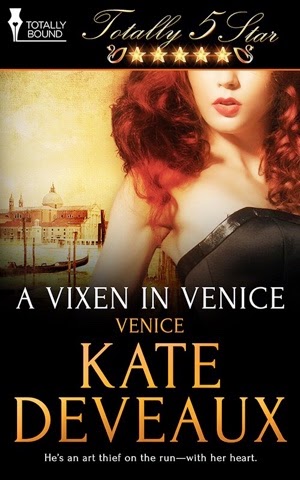 #Synopsis:
He’s an art thief on the run…with her heart
About a Vixen in Venice:
Look closer, into Hotel Totally Five Star Venice, where art curator Monique Le Bres has just walked through the doors of the newly opened swanky luxury hotel to assist with their art collection. Alessandro Bonnard, the world-renowned art connoisseur and collector has been sent incognito to supervise Monique and oversee her acquisitions for the hotel.
Concealing his true identity, Alessandro is intrigued by the art-loving vixen with an appetite for kinky sex. He pursues Monique, charming her at every turn — taking her to places she’s never been — both in and out of bedroom.
Monique falls hard for the man who has utterly captured her body and soul. Only to find out he isn’t who she thought he was after all…he’s an art thief on the run…with her heart.
#MeettheAuthor 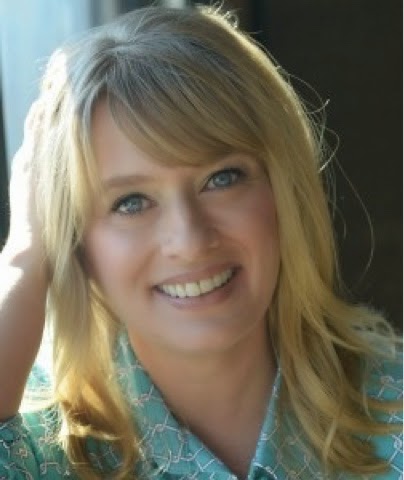 #Excerpt
A VIXEN IN VENICE
by Kate Deveaux
Glancing down at the small map she clutched in one hand, Monique looked back up at the tiny storefronts crammed along the waterway, trying her best not to be overrun by the barrage of tourists filling the tight corridors that ran between buildings and the canal’s murky edge. Searching for landmarks and any discernable signage, she bumped her way between tourists who were busy ogling the unusual architecture that at that moment proved more of an impediment than an attractant.
Tugging at her suitcases, Monique forged on.
The last thing she wanted to do was be late for her new job.
Lurching sideways to avoid a family carrying ice cream cones and pointing enthusiastically at the sights, Monique teetered on her heels to avoid bearing the brunt of their gelatos as they passed. Oblivious to the obstacle they presented to Monique, they carried on, leaving her in their wake.
The wheels on her cumbersome luggage stuck on a rogue stone at the same time her heel gave way. Tumbling down towards the uneven cobbles Monique gasped out loud.
A hand reached out from the crowd and grabbed for her just as her bottom grazed the ground, protecting her from the brunt of her fall by swooping her back up on her feet in one motion.
“Mademoiselle, soyez prudent,” a deep voice urged her to be careful in French.
Monique squinted into the late day sun at nothing short of a vision. A majestic man, early forties, with chin length sandy blonde hair, a goatee and deep set blue eyes that were rimmed by thin metal glasses stood before her. Her hand clasped in his. The man’s tailored camelhair overcoat told her he was distinguished as did the flash of his fancy watch, probably Swiss and very expensive from the sparkle of the crystal that caught her eye as she steadied herself.
“Stai bene Signorina?” he asked if she was okay in a beautiful swoosh of Italian. The words slipping between his lips like honey pooling onto the cool stones.
First he spoke French, then Italian. It was official. Monique must be in heaven.  She’d heard the stereotypes and the holiday stories of her friends vacationing in Europe, but nothing had prepared her for the man who still had her hand in his.
“Fine, yes, thank you, merci…I mean grazie,” she offered, flustered and realizing she was quite able to stand on her own. Reluctantly she let go of his hand to reach down and remove her broken-heeled shoe. “Just tripped on a stone. Una scarpa verso il bass… dieci per andare.” She hoped her Italian wasn’t too rusty.
He just looked at her. Oh damn, it must be more rusty than she’d thought.
“One shoe down, ten to go,” she repeated in English with a nervous laugh, motioning to her luggage. Hoping to make a joke of how many shoes were crammed in her overstuffed bags to cover her embarrassment of very nearly being splayed out on the canal sidewalk if not for the efforts of her handsome saviour.
“Are you sure? I can fetch someone for you if you need assistance Signorina,” the man asked and then glanced anxiously over his shoulder. Monique suspected from his unease that he must have a wife who no doubt would appear any moment and be less than happy to find her hubby fraternizing with Monique. It wasn’t the first time that had happened.
“No, I’m fine, really. Mille grazie.” She thanked him as she looked into his eyes, their depth making her off balance as well as her having only one shoe on and the way he called her Signorina. The word slipping from his mouth like silk.
“ Just tell me where I am, that would be very helpful,” she shifted her weight to the shoeless foot and immediately dropped down a few inches, making her even shorter against his tall stature.
“Calle Ostreghe,” he said the name of the street as she dipped her head down to remove her other shoe.
“See much better,” she said, now even footed in her stocking feet, now firmly planted on the cool stones.
But her words were met by empty space.
The man was gone as quickly as he’d appeared, the swish of his long coat disappearing through the crowds, barely visible around the corner as Monique looked on as if it had been an apparition. A tall handsome apparition.  And one that was seemingly desperate to get away from her before his wife showed up. Lucky woman having a man like that.
#Giveaway:
1 Amazon $15.00
2 Amazon $ 20.00
5   Book bundles: ebooks Platinum Pleasures and The Butler Did It
5  copies brand New Release e book: A VIXEN IN VENICE