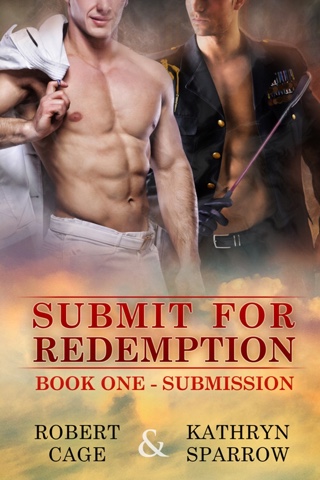 Phineas has been contracted to coerce a false confession from Everett, implicating the captain in planting the bomb. Phineas has tortured many men in the past, but there is something different about Everett Palmer, a man whose sheer purity of soul causes the colonel to question his every selfish, devious act and legion of war crimes.

In Submit for Redemption: Book One - Submission, erotic romance and spiritual redemption come from the most unexpected places - from the seedy extremes of a smoke-laden, neon-drenched bondage den to the tropical, hedonistic pleasures of Phineas' private Greek island.
On this unbidden psychosexual odyssey, Everett and Phineas find exactly what they don't expect: a chance to redeem their troubled souls and fulfiltheir every romantic ideal. But the clock is ticking. The deeper Phineas falls in love with Everett, the harder it becomes to finish his assigned task. If he succeeds, the consequences may be far more explosive than he ever anticipated.

I've found this book quite difficult to rate and review as there were things I loved about it, and other aspects that I wasn't so keen on. I kept changing my mind between giving this book three or four stars, so in the end I decided to go down the middle and give it three point five stars. This book has a very intriguing storyline and there is so much going on. I must admit that I found it all a little confusing at times (but I do have health issues that affect my concentration, so it may have just be me missing things). Despite this though, I just couldn't put the book down! I just had to keep reading to find out what happens next. It does end on a cliffhanger (which I knew before I started reading) so I really want to keep reading the series to find out what happens next.

This is a unique story, with many plus points - I enjoyed reading it even though it did leave me a little befuddled at times (which is not very difficult to do anyway!). Submission receives 3.5 stars.

AUTHOR BIO:
Kathryn Sparrow has had stories spinning around in her head her whole life and finally decided it was time to write them down. After working twenty years in the Software Industry, she has left the engineering world to be a chauffeur mom (because she doesn’t really get to stay-at-home). She lives with her fantastic, geek husband and her two adorable, sometimes infuriating daughters, who are too smart for their Mommy's own good. If she had spare time she would spend it knitting, crocheting, cross-stitching, and doing any other handicrafts that catch her fancy.

In addition to writing fiction, Robert collects books, music, and films avidly, and also contributes to a number of online film sites as a movie reviewer.