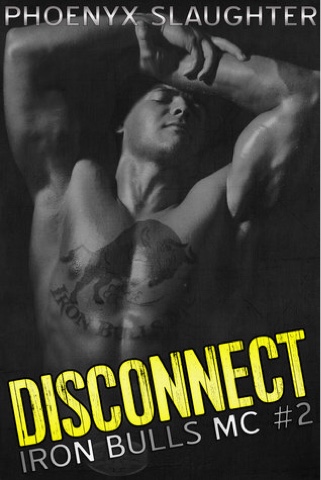 Love and hate aren’t that far apart. Once I loved Logan.

Now he’s kidnapped me, and he's determined to tell me secrets I don’t want to know.

Once I get my baby girl back, Logan’s going to ground. I just have to find the disloyal bastard first.

Then it's time to admit to myself that what Karina and I have is more than sex.

What secrets is Logan hiding? Why does he risk his life to abduct an ex-girlfriend from Dante, the Sergeant-at-Arms of the Iron Bulls MC? Who's telling the truth? Who's lying?

Who can Karina Trust?

Can the passionate bond of two fucked-up people survive the whirlwind trying to tear them apart?

Book #2 in the Iron Bulls MC series. Probably should not be read as a stand-alone.

HFN ending with a mild cliffhanger.

I've been waiting for the follow up to Asunder for a few months and Phoenyx Slaughter didn't disappoint with this fabulously filthy sequel. Karina and Dante's story continues in Disconnect, and you'll be pleased to hear that it is just as sexy and dirty as the first book. Asunder ended on a huge cliffhanger and Disconnect picks up right where it left off. The book is full of suspense, secrets,  excitement, hot bikers and of course lots of kinky sex. There is also more emotion in this book as the bond between Karina and Dante grows stronger.

Dante is fabulous - I do love a rough, dirty talking biker and you can't get much dirtier than Dante. Karina is a lot younger than Dante, but she has been forced to grow up quickly. The big age gap and the Daddy Dom/little girl elements of the book won't be to everyone's tastes, but I really enjoy Karina and Dante's unique relationship. This relationship is really put to the test in this book with Dante desperate to rescue Karina from Logan after he kidnapped her and secrets are revealed that could break the unlikely couple apart.

There is another cliffhanger ending, but it's not as dramatic as the previous one. It has still left me wanting the next book right now though! Karina and Dante are a great couple and I look forward to finding out what comes next for them. Disconnect receives four out of five stars.

I received a copy of this book from the author in exchange for a honest review.
Posted by Unknown at 06:00