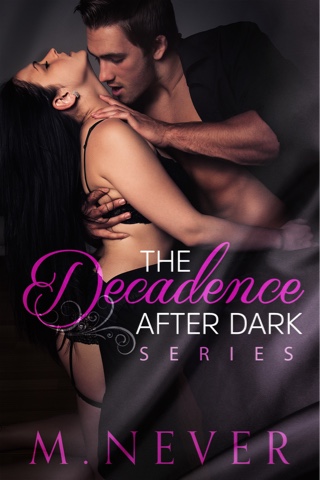 BLURBThree dark erotic tales under one sinful cover...Get Owned, Claimed, and Ruined with The Decadence After Dark Series.One hundred and eighty thousand words of Pulse-Pounding heat, raw passion and insatiable love! Owned (Book One in The Decadence After Dark Series)"I like you collared, baby. I like you naked, I like you mine.”Ellie Stevens has lusted over Kayne Roberts since he first walked into the import/export company she works for a little over a year ago. As Expo’s most important client, Ellie has always kept a safe distance from the man with the majestic blue eyes - until temptation finally gets the better of her. Impulsively, Ellie invites Kayne to one of Expo's infamous company parties her flamboyant boss is notorious for throwing. Unbeknownst to Ellie, the god in the Armani suit isn’t just the suave entrepreneur he portrays himself to be. Underneath the professional exterior is a man with a secret life, dark desires, and nefarious contacts.In a hidden corner of a trendy New York City lounge, the spark kindling between the two of them ignites. Unable to resist the sinful attraction, Ellie agrees to leave with Kayne, believing she is finally bedding the man of her dreams. Little does she know when she walks out the door, she’s about to be Owned. Claimed (Book Two in the Decadence After Dark Series)With one look he consumed me.With one touch he marked me.With one kiss he owned me.With one whisper he claimed me."No matter where you go or who you're with, you'll always be mine."Ellie Stevens thought she had moved on from the domineering man who abducted her. Now living in Hawaii and following her dreams, no one is going to keep her down. But things aren't always as they seem.Kayne Rivers reluctantly let Ellie go, but just because she's gone now, doesn't mean she'll be gone forever. She is his, and he won't stop until he's reclaimed her as his own. Ruined (A Decadence After Dark Novella)Kayne Roberts.Kayne Rivers.Kayne Stevens.No matter his name, one fact remains the same. He's the man who enslaved me, ensnared me, claimed me and ruined me...For all other men that is.My life.My loveMy happiness.All belong to him.I belong to no one but him.He owns me.And I own him. **Owned, Claimed, and Ruined are dark erotic romance. Please pay close attention to the use of the words dark, erotic, and romance. These books have intense sexual situations, a Master/slave relationship, mild abuse, and some violence. Reader discretion is advised** 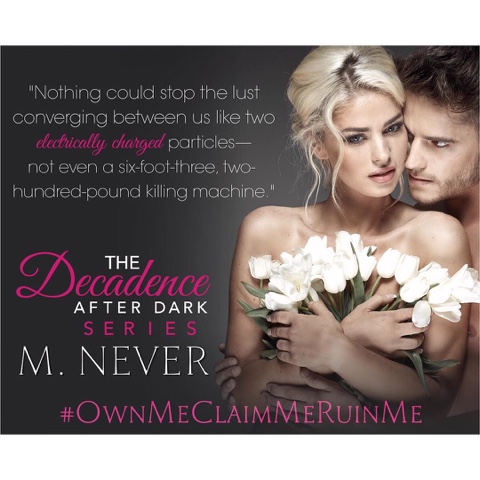 GOODREADS LINK:  https://www.goodreads.com/book/show/26041177-the-decadence-after-dark-box-set PURCHASE LINKS – 99cUS:  http://amzn.to/1J8Ca8mUK:  http://amzn.to/1NjRZze AUTHOR BIOM. Never Resides in New York City. When she's not researching ways to tie up her characters in compromising positions, you can usually find her at the gym kicking the crap out of a punching bag, or eating at some new trendy restaurantShe has a dependence on sushi and a fetish for boots. Fall is her favorite season.She is surrounded by family and friends she wouldn't trade for the world and is a little in love with her readers. AUTHOR LINKSWebsite:  http://mneverauthor.com/ Facebook:   https://www.facebook.com/M.NeverAuthor Twitter:  https://twitter.com/MNeverAuthor Pinterest:  http://www.pinterest.com/MNever21/ Instagram:  https://instagram.com/mneverauthor Goodreads:  https://www.goodreads.com/author/show/8415462.M_Never Goodreads Fan Group:  https://www.goodreads.com/group/show/161286-m-never-books 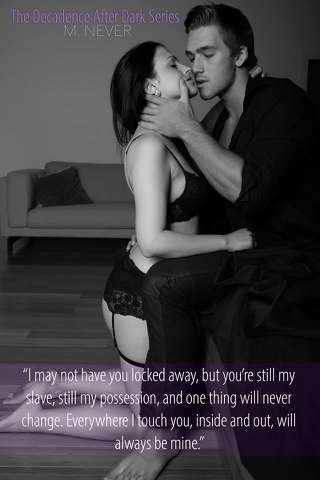 GIVEAWAYThere is a giveaway for a $15 Amazon gift card
a Rafflecopter giveaway
Posted by Unknown at 05:00